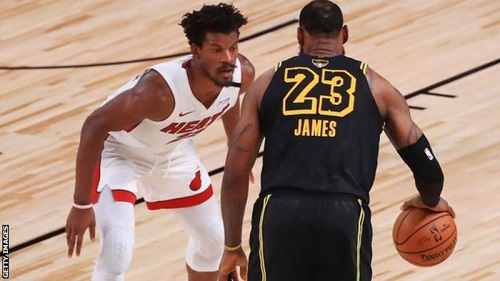 The Miami Heat beat the Los Angeles Lakers 111-108 to win a thrilling game five in the NBA Finals and take the series into a sixth game.

The Lakers led by a point with 21.8 seconds left, before two foul shots by Jimmy Butler nudged the Heat in front.

Danny Green missed a late three-pointer to win the game for the Lakers, as the Heat kept the best-of-seven match series alive at 3-2.

In an end-to-end contest, the lead exchanged hands four times in the final minute of the fourth quarter.

Game five was poised to be another battle between the Lakers' LeBron James and the Heat's Butler, who showed he was up for the fight as he tangled with Dwight Howard in the opening five minutes.

James amassed 40 points in his pursuit of his fourth NBA title and was driving the Lakers forward late on, while Heat talisman Butler's 35-point triple double proved decisive.

Butler, who was also the hero in the Heat's first victory of the series in game three, said his side "have to stay in the trenches" to draw level in the series. 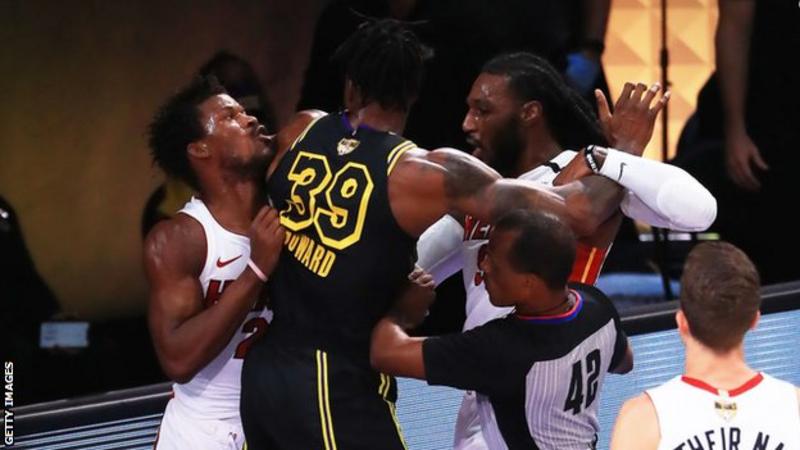 "I left it all out there on the floor along with my guys. It was a bit of luck Danny Green missed that shot at the top of the key."

James, meanwhile, said he "trusted" Green to make "one of the best shots we could have got".

"I was able to draw two defenders below the free-throw line and find one of our shooters, for a wide-open three at the top of the key to win a championship," said James.

"Danny had a hell of a look but it just didn't go down. I know he wishes he could have it again and I wish I could have made a better pass."

The Lakers, who wore their 'Black Mamba' uniforms in honour of Lakers legend Kobe Bryant, had an early injury scare as the influential Anthony Davis limped off the court in the first quarter.

He remained on the sidelines but returned to the action later in the second quarter, in a boost to the Lakers, who can still claim their first title since the late Bryant led them to success in 2010, with victory in game six.

Bryant and his daughter Gianna were among nine people killed in a helicopter crash in January, and the defeat for the Lakers was their first while wearing the commemorative jersey.