'No chance' Fury-Joshua contract is signed on Monday 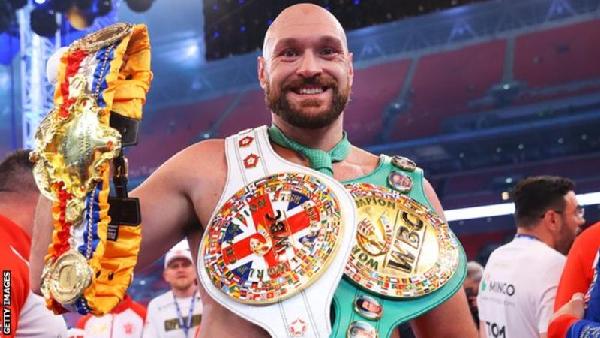 There is "no chance" the contract for a proposed all-British heavyweight world title fight between Tyson Fury and Anthony Joshua will be signed on Monday, says promoter Eddie Hearn.

On Friday, Fury said Joshua "does not want to fight" him, with 3 December being mooted as the date for the bout.

"If he [Fury] really wants to fight, he'll let the teams deal with it," said Joshua's promoter Hearn on Seconds Out.

Fury, 34, offered Joshua the fight despite the 32-year-old suffering a second successive defeat by Oleksandr Usyk in August and failing to regain the WBA (Super), WBO and IBF belts he lost to the Ukrainian in September 2021.

Joshua's team said they have "accepted all terms" to the offer.

Warren said "there shouldn't be a reason" why the contract could not be signed on Monday.

"I am hoping on Monday we'll be able to get it over the line. I don't think there's a lot of issues and the only thing I think can hold it up at the minute is the broadcasters," he told BBC Sport on Saturday.

"AJ said he wanted the fight. We've agreed the financial terms and we've told them they can be involved in all the contracts, setting the budgets for the undercard, everything."

However, Hearn said his team was getting the contract checked, claiming it was "all over the place" after waiting nine days to receive it.

"If he doesn't [want to fight Joshua], and I guess he doesn't, then he'll do what he'll do and the fans might even fall for it," Hearn said.

"But what I am seeing, the fans aren't falling for it.

"We have a meeting on Monday, with DAZN, with BT, with everybody but it's going to take time. If he wants to put a time frame of Monday on it then it's clear to the whole public he doesn't want the fight.

"It's not getting signed on Monday so if he is walking away on Monday the fight is off."