Nyaho-Tamakloe insists the League is Hearts of Oak's to lose 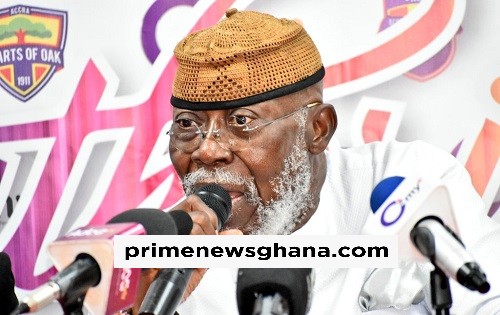 Board member of Accra Hearts of Oak, Dr Nyaho Nyaho-Tamakloe has insisted that the 2019/20 Ghana Premier League is theirs to lose.

The Phobians are yet to pick up a point after losing their openings two games. Hearts of Oak lost their first game by a lone goal at the Accra Sports Stadium to Berekum Chelsea before Medeama compounded their misery with a 3-0 thrashing at the Akoon Park in Tarkwa last Sunday.

They defeat has seen them lie in the relegation zone after the openings two games.

But the Nyaho-Tamakloe has indicated that despite his sides slow start they will be crowned champions at the end of the season to end their 11-year trophy drought.

"The target is to win the league and people will have a shock of their life, they should watch and see what will happen, the performance of some of the clubs that we saw in the past week matches give us the confidence that we can definitely win the league."

"We didn't see anything exceptional in the play of other clubs," Nyaho told Asempa FM

He further touched on the issue of their ex-coach Kim Grant. According to him, it's not a big deal for Hearts of Oak to part ways with their trainer because it happens elsewhere.

"The question of coach and the sacking of coaches by clubs didnt start with Hearts of Oak, it's has been happening in bigger clubs."