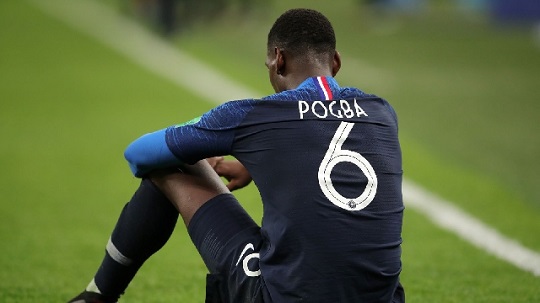 France midfielder Paul Pogba will miss the upcoming World Cup as he continues rehabilitation from a knee injury suffered in July.

Pogba has not played for Juventus since rejoining this summer, having torn his meniscus in July during pre-season.

France kick-off their tournament in Qatar on November 22 against Australia, with barely three weeks for the 29-year-old to return to fitness.

Pogba's agent Rafaela Pimenta said in a statement: "Following yesterday and today's medical review in Torino and Pittsburgh, it is extremely painful to inform Paul will still need recovery time from his surgery. For this reason, Paul will not be able to join the Juventus squad before the World Cup break nor the French National Team in Qatar.

"If wishful thinking would change things, Paul would be playing tomorrow. But what changes things are hard work, resilience and discipline, all of which are the only things in Paul's mind at these challenging times. Paul will continue working giving his very best to be back on the pitch for the fans and his team as soon as possible."

Juventus gave an update on his condition on Monday without explicitly mentioning he would miss the tournament, saying: "In light of the recent radiological examinations and the consultation carried out in Pittsburgh by Professor Volker Musahl for the evaluation of his knee, Paul Pogba needs to continue his rehabilitation programme."

The midfielder confirmed - via a video posted on Twitter last month - that he'd undergone successful surgery on a knee injury and added that he is remaining mentally strong despite speculation around his personal life.

But the latest update comes as another blow for the Frenchman, who has missed 59 games for club and country since the start of last season.

It also means France manager Didier Deschamps will be without both of the central midfielders who started the World Cup final in Russia four years ago, given the recent news that N'Golo Kante will miss the tournament after undergoing surgery on a hamstring issue.