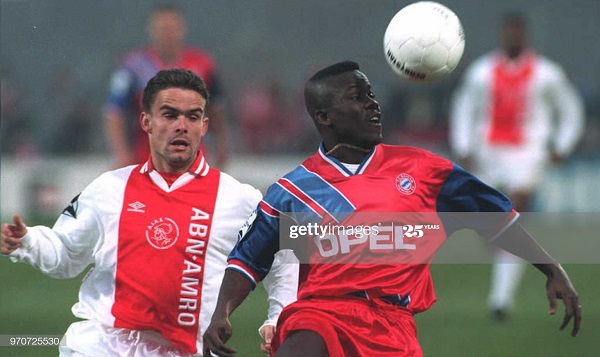 Kuffour speaking to Joy Sports said he has played against some of the very best players to ever play the game but an encounter against Overmars proved to be a tall order for him.

Even though Kuffour was known to be a tough tackler he said Overmars overpowered him for the majority of the game.

"I think it was a 1995 UEFA Champions League game Semi-Final game, I was at Bayern and Overmars was at Ajax. We hosted the first leg in Munich. I was happy because I was going to play against Nwankwo Kanu who was also at Ajax then, he was my friend so we had a lot of talks about the game on phone. Then 30 minutes to the game Giovanni Trapattoni who was our coach told me things had changed, I thought I was going to play in the midfield and come up against Seedorf. But he told me I was going to play at right back, our right back then said he couldn't play because he saw a clip of Overmars tearing up defenders and he was afraid. We started the game first five minutes I had him under control but things changed quickly and he started dominating, but in the second half I had him in my pocket"

He also mentioned that Thiery Henry is another player he struggled to come up against.

"We played against Henry at Highbury, he scored and our coach Ottmar Hitzfeld told me to man mark him for the rest of the game, it was not easy but I kept him quiet".

Osei Kuffour made 54 caps for the Black Stars, In 2001 , he finished second in African Footballer of the Year's voting, repeating the feat accomplished in 1999.

The former Bayern Munich and Roma defender played a total of 353 club matches and claimed six league titles as well as the Champions League in 2001 with the German giants.

Throughout his career he represented clubs like King Faisal in Ghana, Torino, Bayern Munich, Roma, and Ajax.