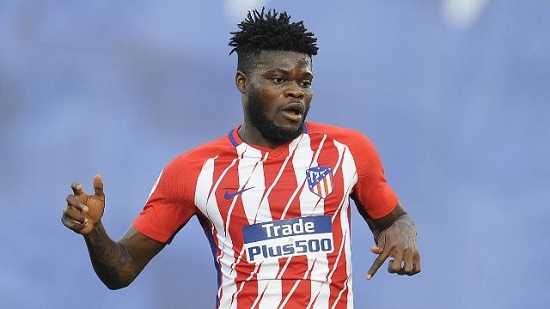 Atletico Madrid star Thomas Partey’s agent has suggested that the player could be on his way to Inter this summer.

The midfielder has been linked with a move away from La Liga in recent months, and his agent has confirmed that Inter could be the club where Thomas ends up playing next season.

“I can say that right now, I haven’t talked to anyone, even if Inter are a top club,” said agent Daniel Jimenez, speaking to Passione Inter .

The 25-year-old has three goals and four assists in 31 Liga games this season, but he has started just 21 of those.

Jimenez was, however, quick to cool any suggestion that a deal had been done for his client.

“We’ll wait for the season to end and then we’ll see.”

Thomas featured for Atletico in his youth, and turned out for Atletico B before receiving a call up to the first team in 2013.

The Ghana international has subsequently won the Europa League and the UEFA Super Cup with Atletico, and has a Champions League runners’ up medal to his name after losing out to fierce rivals Real Madrid in the 2015-16 final at San Siro.

He featured in this season’s Champions League as Atletico were beaten by Juventus in the last 16, but that may have been his European farewell for the club, who are reportedly allowing him to leave this summer.

Atletico travel to Levante - against whom Thomas scored his first goal for the club in January 2016 - on Saturday for the final game of the season 11 points behind champions Barcelona, in what could be Thomas’ final game for the club.

It may also signal the end for another long-serving player in Antoine Griezmann, who announced his decision to leave the Spanish club on Tuesday.

It may all turn out well for Diego Simeone’s side, however, as Inter’s Mauro Icardi may be regarded as the perfect replacement for Griezmann, and the striker could reportedly be involved in any negotiations between the two clubs for midfielder Thomas.
Read also: