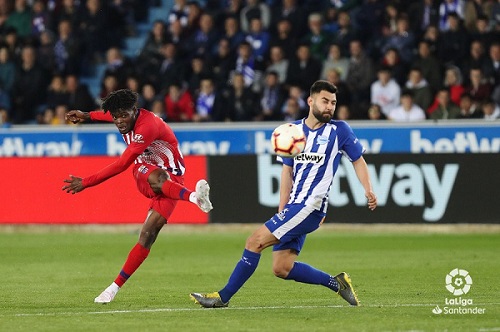 Thomas Teye Partey scored a screamer for Atletico Madrid as they thumped Deportivo Alaves 4-0 in the Spanish La Liga on Saturday night.

The Ghana international scored the fourth goal for the Rojiboancos with a thunderous strike after he received a pass from Koke at the edge of the penalty box.

Spanish international Saul Niguez opened the scoring for the Atletico Madrid in the fifth minute before Diego Costa doubled the lead six minutes after.

Just after the interval former Real Madrid man Alvaro Morata got the third in the 59th minute before Ghana’s Thomas Partey completed the demolition with a stunner in the 84th minute.