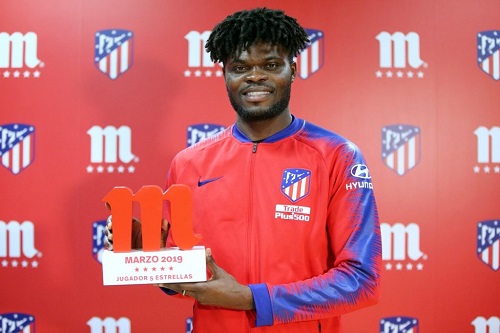 Partey who has been on the books of several top clubs in Europe was adjudged the club's best player for last month following his sparkling performance.

His heroics in games against Real Sociedad, CD Leganes, Deportivo Alaves and Atletico Bilbao did not go at the Los Rojiblancos.
The Black Stars midfielder scored a solitary goal in March which was a stunner against Deprotivo Alaves.
The 25-year-old has been a key part to Diego Simeone’s side this season, making 27 La Liga appearances for Los Rojiblancos, scoring three goals and providing three assists.
Read also:
Thomas Partey speaks on rumours linking him to Man City, United and Real Madrid
VIDEO: Partey' scores screamer for Atletico Madrid against Alaves
EXCLUSIVE: Real Madrid consider shock move for Thomas Partey