VIDEO: Kim Grant returns to Hearts of Oak amid rumours of quitting 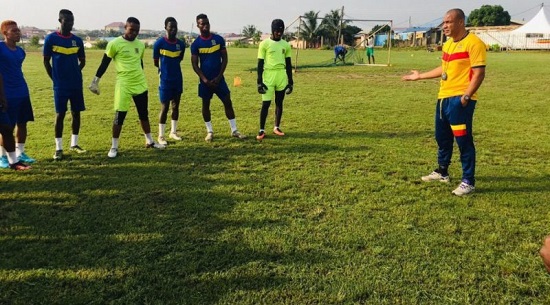 VIDEO: Kim Grant returns to Hearts of Oak amid rumours of quitting

Hearts of Oak head coach and director of football Kim Grant has returned into the country and has started with his coaching duties.

Kim Grant arrived safely yesterday after taking a few days off to check up on his family in Czech Republic, and this morning took to his duties at the Pobiman Sports Complex.

Rumours circulated that the ex-Black Stars striker was not pleased with the way Mark Noonan left the club, also he doesn’t think he can work under the new system so he has decided to follow the American.

Hearts of Oak released a statement to refuted claims circling in the media and in truth the coach has returned to his post.

A video sighted by PrimeNewGhana on Hearts of Oak Twitter handle saw the coach scream into the camera: 'I'm back' at the Pobiman Sports Complex.