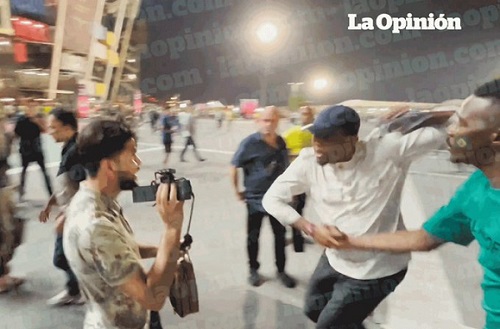 Samuel Eto'o has been seen appearing to attack a man outside a stadium at the Qatar World Cup.

Footage of the former Chelsea man, shared by La Opinion, circulated online as the incident happened when he was leaving Stadium 974 in Doha on Monday evening. Eto'o had been watching Brazil dismantle South Korea in their first knockout round match of the 2022 edition.

Eto'o had appeared to be in good spirits as he smiled and took photos with fans. However, as Eto'o started to leave a man appeared to the right of the Cameroonian, and Eto'o - after initially walking away - turned around to confront the man.

The former Barcelona man can then be seen chasing the man, who is holding a camera to the face of Eto'o.

Eto'o is then held back by a group of onlookers - as other men attempt to lead away the man that had been filming Eto'o. However, the Cameroonian managed to break free, and he appears to kick the man in the face while he is bending over, which knocks him to the ground.

Eto'o is led away from the incident as the man shouts something in the direction of the star. It is not clear what he said to rile the ex-Inter Milan forward.

Eto'o hung up his boots in 2019 after a short spell with the Qatari side, Qatar SC.

In December 2021, he was appointed as the president of the Cameroonian FA, and he had travelled to Qatar to watch his national side - who were dumped out of the group stages, despite his prediction they would be the winners of the competition.