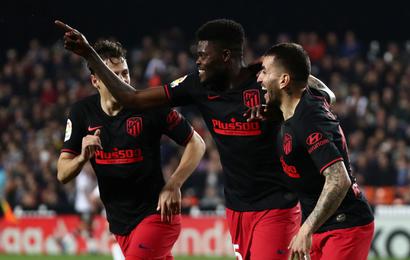 Atletico Madrid ace Thomas Partey has called on his teammates to give their maximum best in the wake of their scoring draw with Valencia on Friday.

Atletico Madrid have just one win in their last five league matches, drawing two and losing two and stay in fourth place in the standings.

In the wake of Friday's stalemate againstÂ Los Ches, the Ghanaian said their run of form will be better if they keep pushing hard.

â€œValencia play well and are strong at their stadium," Partey told theÂ club websiteÂ after the match.

"They had the ball and we tried to play our game.Â

"We have to keep working hard because results will come if we do so."

Thomas Partey registered his second La Liga goal of the season as Atletico Madrid were held to a 2-2 draw by Valencia.

Marcos Llorente opened the scoring for Atletico Madrid in the 15th minute but they were pegged back whenÂ Gabriel Paulista equalised five minutes to the break.

However, Thomas Partey restored his side's advantage two minutes to half time when he went on a solo run before firing in a fierce shot from the edge of the 18-yard area which left Valencia goalie Jaume Domenech with no chance.

The home side once again drew levelled courtesyÂ Geoffrey Kondogbia in the 59th minute.

Atletico Madrid will on Tuesday take onÂ Liverpool at the Wanda Metropolitano in the Champions League round of 16.