Wrap up of Ghana Premier League matchday 22: Medeama, Kotoko pick up wins as Hearts of Oak lose to Dreams 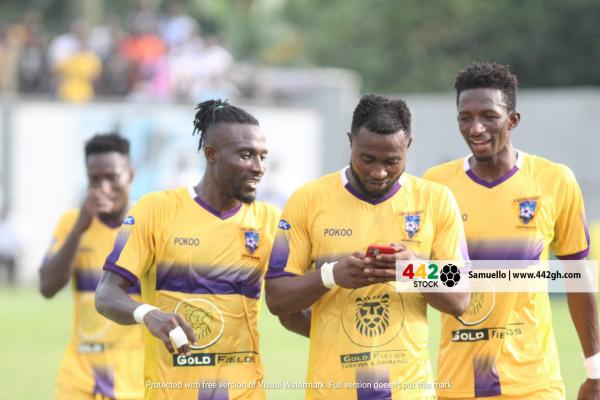 10-man Accra Hearts of Oak suffered a 2-0 defeat away to Dreams FC at the Theatre of Dreams in Dawu in Match week 22 action.

The defeat sees the Phobians drop to fifth on the league log while Dreams move above them into 4th.

The first half ended goalless as both teams failed to take advantage of their opportunities to find the opening goal.

Just six minutes into the second-half, Nuru Sulley was sent off after picking up a second yellow card for a foul on Oduro who was through on goal.

The hosts then took the lead from the resultant free-kick of the incident in the 51st minute through Ali Huzaif.

Substitute Sylvester Simba then doubled the lead for Dreams in added time to complete victory for the home team.

The hosts dominated possession in the opening minutes but failed to create good goal-scoring opportunities but in the 36th minute, their dominance paid off as Maxwell Abbey Quaye fired in a superb goal to give the hosts a 1-0 lead.

Joshua Rhule then scored from close range in the 85th minute to make it 2-0 to Olympics and seal the win for the home side.

The win moves the Dade Boys into third place on the league log, while Liberty sit just a point above the relegation zone. 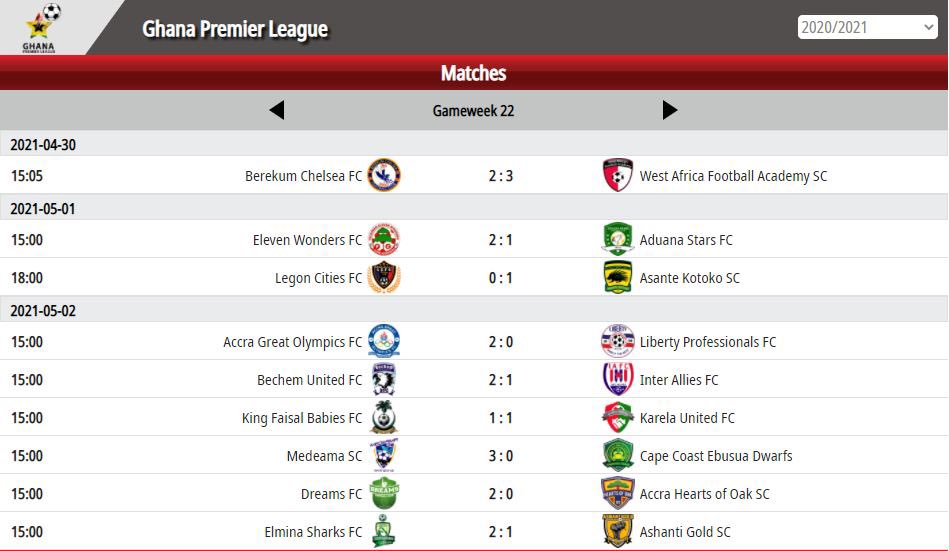 Medeama SC defeated Ebusua Dwarfs 3-0 to retain their spot at the summit of the Ghana Premier League log.

Toure opened the scoring for Medeama in the 49th minute after a shaky first-half.

Ibrahim Yaro then doubled their lead in the 57th minute before Opoku Agyeman added a third in the 67th minute to complete the victory for the home team.

Five minutes after recess Abagna scored his 7th goal of the season to put the Miners ahead in Elmina after being set up by Isaac Opoku Agyemang.

Hammond then restored parity for Elmina Sharks in the 69th minute before substitute Kingsley Braye completed the comeback for Sharks in the 77th minute.

At the Nana Fosu Gyeabour Park, Bechem United handed Inter Allies their 14th defeat of the season with a 2-1 win in Match week 22.

Salifu Moro put the hosts ahead in the 27th minute via a spot kick after Bechem were awarded a penalty.

Bechem doubled their lead in the 42nd minute through Hafiz Wontah Konkoni.

Inter Allies however managed to get a consolation goal in the 65th minute when defender Hashmin Musahâ€™s header forced the goalkeeper to put the ball into his own net.

King Faisal started the game on the front-foot as they took the lead early in the 13th minute through Zubairu Ibrahimâ€™s header.

The home side were close to doubling their lead but the woodwork denied them following a long range strike from Isaac Frimpong.

The visitors came into the second-half determined to find the equaliser and Maxwell provided that for them late in the game to deny King Faisal victory.

Karela United are yet to secure a win in the second round of the Ghana Premier League. 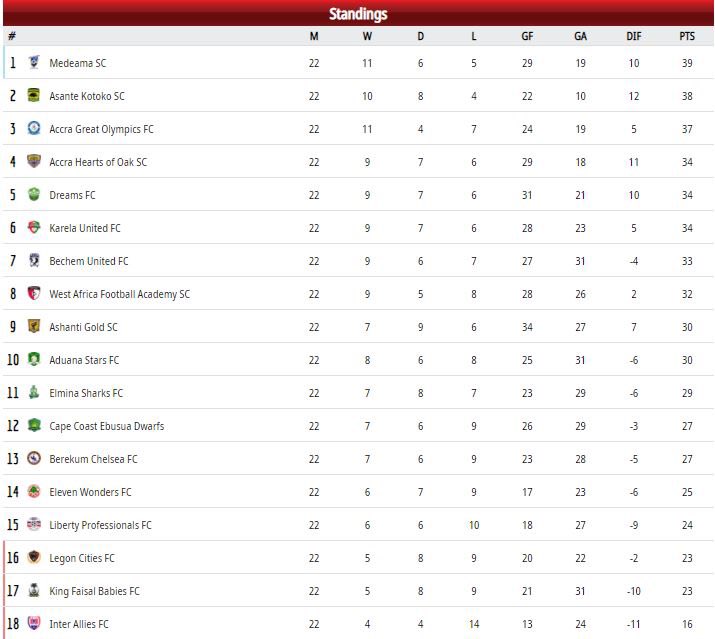 Legon Cities fell behind after 13 minutes and were unable to muster a convincing response.

Augustine Okrah delicately flicked home with his left foot a free-kick sent in by Brazilian midfielder Fabio Gama to give Kotoko the lead.

Porcupinesâ€™ skipper Emmanuel Gyamfi â€“ who won the man-of-the-match award â€“ had an opportunity to make it 2-0 in the 36th minute but his strike into the far post missed the target by inches.

The result pushes Legon Cities into the relegation zone, third from bottom of the 18-team Ghana Premier League with 23 points.

Techiman Eleven Wonders came from a goal down to record their first win of the second round with a 2-1 win over Aduana Stars.

Bright Adjei opened the scoring in the 13th minute before Tetteh Nortey leveled for the home team in the 22nd minute via a penalty.

The game seemed to be heading to a draw as both teams failed to find the back of the net in the second-half but Samuel Boakye clinched the winner for Wonders in added time (90+2).

WAFA came from behind to record a 3-2 victory over Berekum Chelsea at the Golden City Park on Friday, in a Matchweek 22 encounter.

Bright Amponsah scored the fastest goal of the season so far when he put Berekum Chelsea ahead in the first minute.

That lead lasted for 21 minutes as WAFA grabbed the equalizer in the 22nd minute through Justus Torsutsey; who netted for the first time this season.

Just a minute later, Enock Asubonteng put the visitors ahead.

Berekum Chelsea however drew level for the home team in the 43rd minute through a penalty taking the sides into the break level.

WAFA headed into the second-half with purpose and were immediately rewarded as Issah Bassit scored the only goal of the half in the 48th minute to give the Sogakope based club all three points.