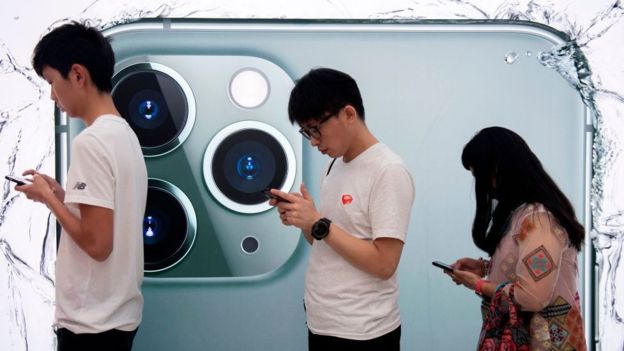 Every Autumn, Mazen Kourouche heads to the biggest Apple Store in Sydney, Australia, and queues up for hours to be one of the first people in the world to get his hands on the latest iPhone.

"Since the iPhone 7 came out I've been lining up for the new Apple devices for a few reasons: firstly the hype associated with them, secondly because of the resale value, and thirdly because Australia is the first country to get access to the devices, so people are interested in hearing about it," he says.

According to Mr Kourouche, who develops software for the iPhone operating system (iOS), many people would usually travel from overseas to get their hands on the iPhone in Australia. The nation's time zone means its Apple stores are the first to open around the world on launch day.

This year could be different though. Like most other retailers, Apple has closed its shops around the world in response to the coronavirus outbreak.

It's still too early to say whether the shops will be back open in the time for the launch of new devices in the autumn.

But in some countries the picture is not encouraging. In the UK, the government has said that it could be between three to six months before normal life will resume and that includes re-opening non-essential shops.

In the case of Apple, it has its iPhone 12 waiting in the wings. It's a particularly important phone, as it's the first to incorporate 5G technology, allowing it to connect with the new generation of faster phone networks.

Sources have told the Japanese publication Nikkei that Apple is weighing up whether to delay that launch.

The same may be true for devices manufactured by Samsung and other rivals that use the Android operating system.

Production of phones has already been disrupted,

"Approximately 70% of smartphones are manufactured in China - so as the pandemic hit China, there has been significant disruption to the supply of existing devices," says Razat Gaurav, chief executive of Llamasoft, a supply chain analytics company.

Many smartphone makers rely on components that are made in China and South Korea, two nations that have been hardest hit by the outbreak.

The South Korean city of Daegu, where most of the country's coronavirus cases are clustered, is only 20 minutes away from the area where many of those components are produced.

And it's not just supply, demand has fallen dramatically. Shipments of smartphones in China tumbled by 40% in the first quarter of 2020, compared with the same period last year, according to research firm IDC.

The company suggests that Chinese consumers will buy 33 million fewer phones in the first three months of the year.

"We're likely to see significant drops in Western Europe and the US as well," Gaurav adds.

The effect on existing devices will be a worry for device manufacturers, but it will be the impact on their new devices which will be of greater concern, particularly as fans of Apple and Android devices are accustomed to specific times of the year when they can buy a new device, while manufacturers rely on this as one of the biggest revenue streams every year.

"The smartphone is a complicated product, and there are so many components that go into it. In order to source all of those different parts, you're getting materials and parts from about 40 different countries," says Gaurav.

Different parts of the production process will be affected in different ways.

"Much of the design work does not require significant social contact, meaning you don't have to be in physical proximity to people," says Frank Gillett, an analyst at research firm Forrester.

But there may be some research and development work which requires specialised equipment that employees can't take home.

A lot of this work would have already been carried out for devices set to launch this year, but it could hinder device launches in 2021, which companies are already working on ahead of time.

According to Emile Naus, partner at consultancy BearingPoint, the most important part of the phone is not the hardware, it's the software, and this can be developed remotely. However, testing the device may be harder to carry out.

"Testing may be hard as the industry is very tight on security and they would probably struggle with the concept of people taking home prototypes of the phone to test - as these are usually shrouded in secret," he says.

The other issue is around shipping; with many airlines suspending flights and delays with ocean freight, there is a chance that materials and components may not get to assembly plants, and that the finished product does not get to retail outlets.

The effects of this and the China factory shutdowns are only now starting to ripple down into the smartphone industry, and the impact could be bigger than expected.

Mr Gillett believes that the likes of Apple and Samsung are more likely to hold back on certain features for new devices than delay launches. The time to get certain features tested, or for software developers to be able to work on applications that make use of these features, is critical.

Much obviously depends on what happens in the coming months. Restrictions on delivery and shipping might force firms to delay product launches, and possibly launches may even be held back until 2021.

If shops stay closed then this could be a particular problem for Apple, which has an important retail network.

"We know that the first weeks and months of these new devices' sales life are very important because they're sold at the highest levels," says Mr Naus.

Demand for the new devices may also falter, as spending serious amounts of money on the latest model may not be an option for householders going through financial difficulties.

But Forrester does not see brands making big changes to the price of their new handsets. Instead it thinks they may cut prices further on their older models, and perhaps bolster the number of entry-level priced-models available.

Prices may not come down - but if the demand is not there, then perhaps new strategies could be put into place.

"What you might also see are some creative pricing models to make it feel more affordable and responsive to people's situations. Perhaps there will be a temporary promotion to help people out at a lower price if they can show an unemployment cheque or an emergency services ID," says Mr Gillett.

However, Apple's biggest fans are likely to remain loyal.

"I don't think [the pandemic] will impact interest, especially amongst consumers because we're always buying new things: right now the big thing is toilet paper but eventually it'll go back to being iPhones," says Mr Kourouche.