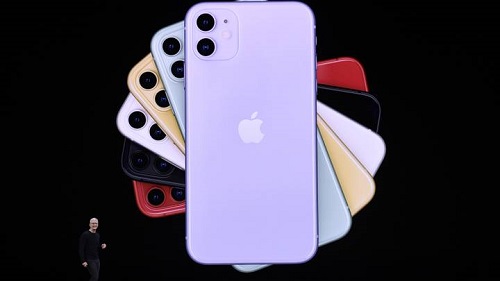 Apple has unveiled its iPhone 11 range of handsets, which feature more cameras than before and a processor that has been updated to be faster while consuming less power.

But it did not launch a 5G model, and some rumored features were missing.

The BBC's Dave Lee went hands-on with the new iPhone 11 and iPhone 11 Pro, to share his first impressions.

The new iPhones are notable for introducing an "ultrawide" rear camera, offering a 2x optical zoom-out.

The Pro models retain the telephoto and normal lenses found in the last generation's XS and XS Max, while the basic iPhone 11 only has an ultrawide and standard lens.

Apple made a virtue of a new Night Mode, which automatically brightens the image when required while taking steps to minimise the digital noise produced as a result.

Google, Samsung, and Huawei had already introduced a similar feature to their handsets.

A new facility called Deep Fusion was also teased. It takes nine snaps with a variety of exposures and then picks through them "pixel by pixel" to combine the best parts from each to create a superior image.

This will not, however, be available at launch but should be added via a software update before the year's end.

Other enhancements include the ability to shoot slow-motion videos with the front camera.

The handsets' processor - the A13 Bionic - has also been upgraded.

In addition, the chip's "neural engine" has been optimised to better handle matrix calculations - a type of algebra used by neural networks - and is said to be 20% faster than the A12.

However, the new models are not compatible with Apple's Pencil stylus, as had been expected by many. That feature was already offered by its lowest-end iPad.

Nor can they wirelessly recharge other devices, unlike Samsung and Huawei's premium phones.

The handsets also stick with having lightning ports rather than making the shift to USB-C, as has happened with the iPad Pro - which could have made faster data transfers possible.

The iPhone 11 is slightly cheaper than its XR forerunner in the UK, ranging between Â£729 and Â£879 depending on the amount of storage.