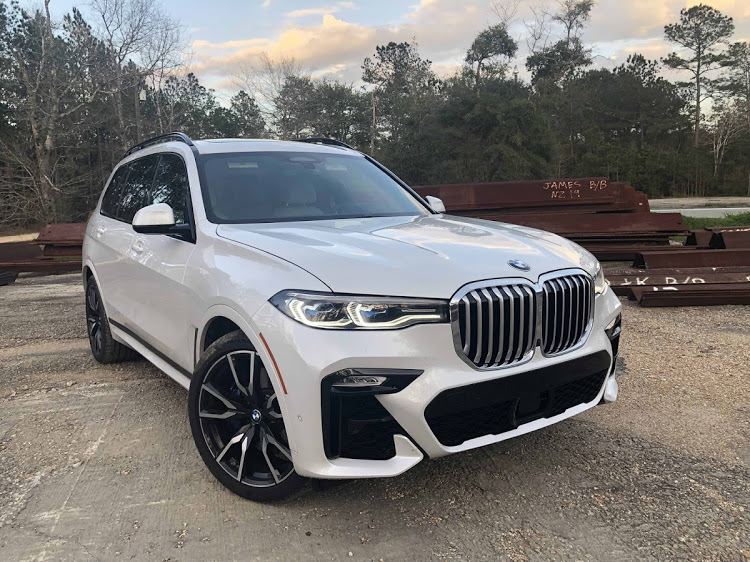 Behind that 'braai grid' grille is a luxury seven-seater that can be considered the 7 Series of SUVs.

In the US, the new BMW X7 is not as larger than life as you might expect from a vehicle measuring 5,150mm.

Driving along the interstate from Tallahassee in Florida to Baton Rouge in Louisiana at the X7’s international media launch, it seemed almost hatchback-like in its size as we were passed by oversize bakkies and big rig trucks.

But when the X7 arrives in SA in May, it is going to feel much bigger, although it is actually 12mm shorter than one of its biggest competitors, the Mercedes-Benz GLS.

It’s more imposing than its Stuttgart rival though, much more imposing. That’s mainly down to that massive braai grille at the front that sits there like some kind of cartoon evil grin. It looked terrible in the original images and, frankly, is not a great piece of design in the real thing, but it seems slightly less vulgar in the metal particularly as a part of a vehicle sitting 1,805mm tall. 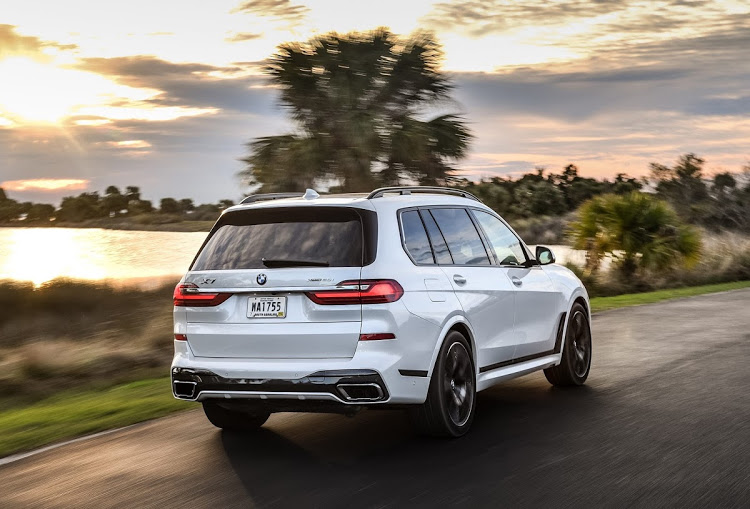 All this supersizing translates into a 3,100mm wheelbase which means loads of interior space to accommodate the third row of seats. BMW project manager, Jorg Wunder, says the X7 is the 7 Series of SUVs which means this is no ordinary three-row cabin. Those rearmost seats are surprisingly comfortable, with decent footwells and even rather good headroom, something that is rare for an adult sitting in the cheap seats.

Wunder said those rear seats weren’t an afterthought and had the same features as the middle row of seats, so you get cup holders, USB ports, adjustable seat belts and even clever lighting strips that flash to warn you that an object might be approaching before you try to climb out of the vehicle.

There are also climate controls, buttons to adjust the seats in front to give you more legroom and the seats themselves feature the same upholstery as the others. And they can be folded flat into the floor to increase the luggage space from 326l to 750l. Fold the middle row down and that can be expanded to a vast 2,120l.

Could BMW be Daring Trump?

The middle row is also important because you get the choice of making your X7 a six or seven seater. Opt for the former and you get two individual chairs in the middle to convey an even greater sense of luxury.

And luxury is what the X7 is all about. Contrary to some opinions, the X7 does not sit on the same platform as the Rolls-Royce Cullinan and the level of luxury is not the same either, but then you aren’t paying Rolls money.

This might be the flagship SUV for the Bavarian brand but expect to find a very long list of optional extras ensuring you can almost completely ignore the list price but there’s lots on offer as both standard and options.

There’s sumptuous leather for all seats that can even be specified with a Bentley-style quilted design. The seats can be heated or cooled of course and there are amazing pillows which can be fitted to the headrests. There are heated and cooled cup holders, the latest generation iDrive and multimedia TFT instrument cluster display.

The X7 comes with laser lights — tell people you have laser lights and they might forget to discuss the grille. You can have wheels between 20 and 22-inches and a vast array of interior ambient lighting colours. You can also have a panoramic roof that can change colour to match your ambient choice, and the options list even includes a Swarovski glass gearstick.

Then there are driving systems, lots of them. The X7 is equipped with all-round air suspension and there is the option of an xOff-Road package which includes bespoke settings, a differential lock and underbody protection. We didn’t get to experience the X7 off-road and most owners probably won’t either, but expect it to match the Mercedes, although we doubt it will quite be in the same off-road league as another of its key rivals, the Range Rover.

There is the option of remote parking like the 7 Series and other driver assistance systems include lots of assistants like Traffic Jam Assistant, Blind Spot Assistant and Lane Keeping Assistant. This last one deserves a mention because when even the vehicle’s project manager tells you he turns it off as soon he gets into the car, then you know it’s not great. And it wasn’t, at one point getting so upset with our proximity to the white line while passing a cyclist that it tried to force us back into the cyclist. The explanation? The system reads white lines, it does not detect cyclists; that’s another system.

Both provided a high level of grunt as you would expect them to, but it was the level of silence that was quickly noticeable. The Cullinan has 100kg of sound insulation material to make it quiet in the cabin, the X7 does not, yet when it started to rain it was clear that the only real sound inside the BMW was of the rain on the windscreen. That’s rather impressive.

We were hoping to also be impressed by the dynamic handling. Sadly the only corners we found on the around 600km road trip were the occasional slip road on or off the highway; the rest was cruise control on at about 55mph (88.5km/h) and take in the scenery, which ranged from hurricane ravaged Alabama to the seemingly endless beach of Pensacola before the characterful streets of Baton Rouge.

If BMW wants people to know it has created a comfortable and spacious long-distance cruiser, then it has succeeded. It is the 7 Series of SUVs and unlike the luxury sedan, it has up to seven seats.