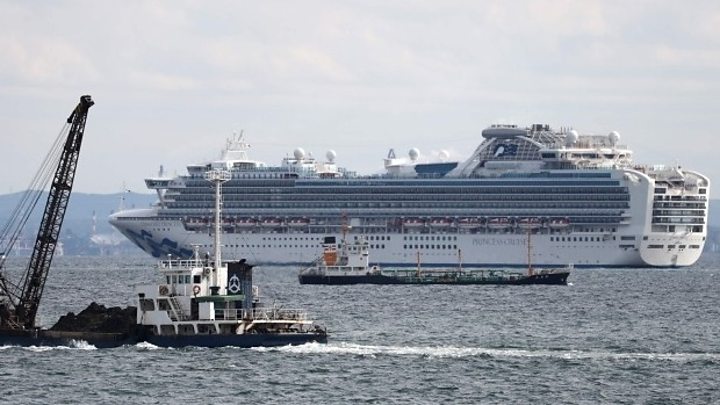 Another 41 people on a cruise ship off the coast of Japan have tested positive for the new coronavirus - bringing the total to 61.

Some 3,700 people are on board the Diamond Princess, which is quarantined in Yokohama for at least two weeks.

The checks began after an 80-year-old Hong Kong man who had been on the ship last month fell ill with the virus.

He boarded the cruise ship in Yokohama on 20 January and disembarked in Hong Kong on 25 January.

A separate cruise ship - the World Dream - has been quarantined in Hong Kong after eight former passengers caught the virus.

It has around 3,600 people on board, but none have tested positive so far.

The new cases on the Diamond Princess bring Japan's number of confirmed cases to 86, the second-highest figure after China.

"Today they will be sent to hospitals in several prefectures, and we are now preparing for that."

With the quarantine due to last until 19 February, there has also been concern over supplies of normal medicine to the ship.

One passenger has been waving a Japanese flag with the message "shortage of medicine". A Japanese TV crew on the shore responded with a banner asking: "What medicine?"

Twenty passengers diagnosed earlier have already been taken to hospitals.

The 61 confirmed patients are from:

David Abel, from the UK, is a passenger on the Diamond Princess and is providing regular updates via Facebook

"We are to monitor our temperatures on a regular basis, and if it's increased above normal we are to contact the medical services onboard of the ship."

"Passengers in the small inside cabins have no window, there is no daylight, and no fresh air... but the captain has announced those passengers will be allowed access to open deck for exercise and fresh air."

"If we are permitted out on open deck, we have to wear a mask when we're outside. We have to keep one metre apart from everyone else and are not allowed to congregate in groups."

"All of the luxury of having a steward come to make the bed and put a chocolate on the pillow - those days are gone. We have to take care of the cleanliness and hygiene of our own room."

"We're going through all the clothes we put into our dirty wash bag and we're just re-wearing them now. Our underwear we're washing by hand - we don't have anything other than hand soap."

"The first day in isolation, the supply of food wasn't good. Now it's superb."

The new coronavirus can cause severe acute respiratory infection, which in some cases can be fatal. Most people infected are likely to recover though.

The centre of the virus is in the Chinese city of Wuhan, and most cases have been in the city and the surrounding province of Hubei.

It has spread overseas with confirmed infections in at least 25 nations.

So far, there have been only two deaths outside of mainland China - one in Hong Kong and one in the Philippines.

Due to the global spread, the World Health Organization (WHO) has declared a global health emergency.