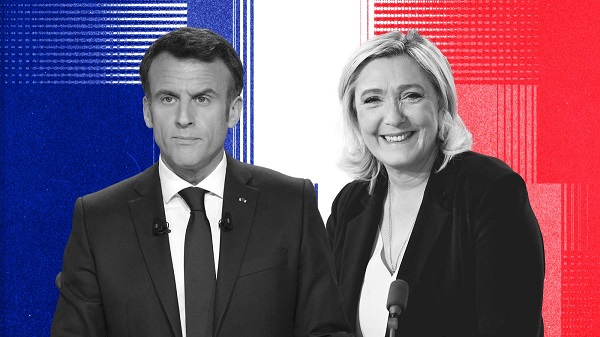 The two candidates for the French presidency have gone head to head in their only televised debate, ahead of Sunday's second-round run-off vote.

Far-right leader Marine Le Pen has fallen behind centrist Emmanuel Macron in the opinion polls but millions of voters are still undecided.

It did not take long for the two-hour-45-minute clash to burst into life.

The candidates confronted each other on the cost of living, Russia, climate change and immigration.

Spiralling prices, of energy and at the shops, have dominated the campaign and immediately took centre stage in the debate, broadcast on the two biggest TV networks as well as the big news channels.

Emmanuel Macron was widely seen as the winner of the 2017 debate, when his rival appeared flustered and underprepared. But this time, Marine Le Pen was ready from the start and far more composed.

Throughout the debate, it was Mr Macron who went on the offensive, appearing more like a challenger than an incumbent, repeatedly interrupting his rival.

Ms Le Pen said 70% of the French people believed their standard of living had fallen over the past five years and she would be the president of civil peace and national brotherhood. "We need to give priority to the French in their own country," she said.

Mr Macron said France had known unprecedented crisis, with Covid followed by war in Europe. He had steered France through those challenges and aimed to make France a stronger country: the vote was a "referendum on Europe, on secularism, and a moment of clear choice", he said.

Despite a strong performance from Ms Le Pen, a poll of voters from French broadcaster BFMTV and newspaper L'Express suggested Mr Macron had come out the winner. The vote, carried out by well-known pollsters Elabe, suggests that 59% of viewers were more convinced by Mr Macron.

The sitting president came out on top as the most presidential, 53% to 29% - but 50% of viewers also said he had come across as arrogant. Ms Le Pen was deemed to be more in tune with normal people (37% to Macron's 34%), but 50% of voters also found her "worrying".