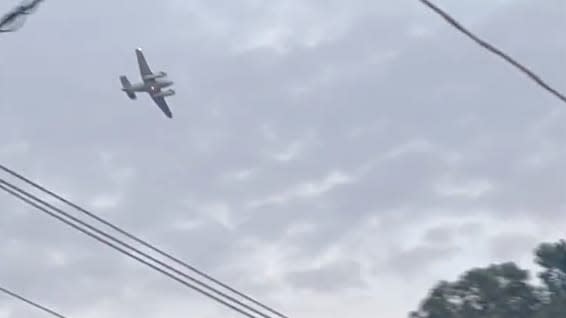 A pilot who circled above a Mississippi city for hours and threatened to crash into a branch of Walmart has landed the plane safely after talks with police.

State Governor Tate Reeves tweeted that no one had been injured, offering his thanks to law enforcement in Tupelo.

A livestream by a reporter of local television station WTVA appeared to show the vehicle sitting in a field.

The Walmart and another nearby store were earlier evacuated, while citizens were asked to avoid the area.

Details of the conversation between the pilot and police while he was in the air, or his identity, were not immediately made public.

However, local media report the pilot was arrested after landing the plane.

Police were originally notified at around 05:00 local time on Saturday (10:00 GMT) of a plane flying above the city, an earlier statement said.

At the time, police described it as a "dangerous situation".

The statement added that the plane was possibly a "King Air type" - referring to a small utility plane.

The pilot was said to have made contact with E911 - an emergency number - and proceeded to make their threat to intentionally collide with the Walmart.

Leslie Criss, a local journalist, told The Associated Press news agency she had never seen anything like it in the city, and that it was a "scary way to wake up on a Saturday morning".