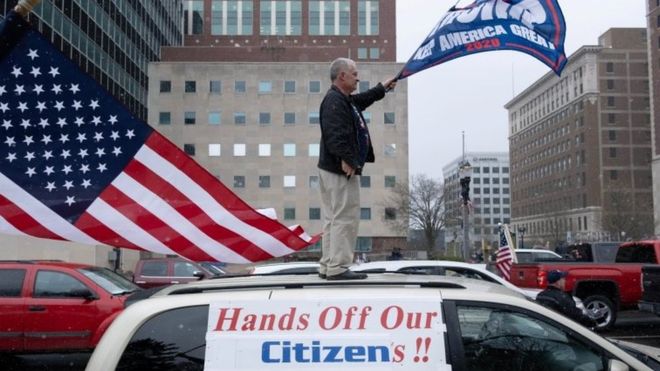 President Donald Trump has defended his tweets in which he appeared to endorse protests against stringent lockdown measures in several US states.

At his Friday briefing, he said some measures imposed by Minnesota, Michigan and Virginia had been "too tough".

Earlier, he wrote in a series of tweets: "LIBERATE MINNESOTA", "LIBERATE MICHIGAN" and then "LIBERATE VIRGINIA".

The curbs, including the stay-at-home orders, are needed to halt the spread of coronavirus, health officials say.

But protesters say they are hurting citizens, by limiting movement unreasonably and stifling economic activity.

The US saw its highest daily death toll on Thursday, recording 4,591 deaths in 24 hours.

That spike could be because Johns Hopkins University, which records the data, began to include deaths with a Covid-19 probable cause.

The US has the highest number of cases and deaths worldwide, nearly 700,000 confirmed infections and more than 36,000 deaths, according to Johns Hopkins.

Demonstrations calling on authorities to end the shutdown have occurred in Michigan, Ohio, North Carolina, Minnesota, Utah, Virginia and Kentucky.

The states Mr Trump referred to in Friday's tweets are all led by Democrats. Ohio and Utah, which he did not mention, have Republican governors.

More demonstrations are planned, including in Wisconsin, Oregon, Maryland, Idaho and Texas.

The protests have varied in size, ranging from a few dozen people in Virginia to thousands in Michigan.

His Friday tweets contrast with his stance on Thursday, where he said he was sympathetic to the demonstrators, but "they seem to be protesters who like me... my opinion is just about the same as all of the governors".

Minnesota Governor Tim Walz responded to the tweets, saying he called the White House to ask "what they think we could have done differently", but did not hear back.

"The president unveiled a three step plan that mirrors exactly what we're trying to do," Mr Walz told reporters.

"I called to ask, what are we doing differently about moving towards getting as many people back into the workforce without compromising the health of Minnesotans or the providers?

"And that will probably take longer than a two-word tweet, but I think there's responsibility to tell us that."

What does federal guidance say?
That guidance recommends three phases of slowly re-opening businesses and social life, with each phase lasting a minimum of 14 days.

It includes some recommendations across all three phases including good personal hygiene and employers developing policies to ensure social distancing, testing and contact tracing.

Dr Anthony Fauci, from the White House coronavirus taskforce, cautioned that even as restrictions were eased "it's not game over".

He warns that the virus may rebound, and there could be setbacks along the way.