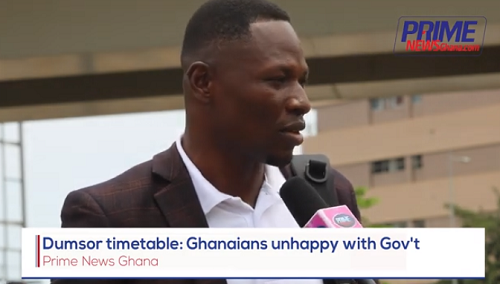 A cross-section of the Ghanaian public have registered their displeasure with Government over the release of dumsor timetable by the Power Distribution Services, PDS, on April 5.

The decision to begin the release of the schedule was taken at a meeting between PDS, the Volta River Authority (VRA) and the Public Utilities and Regulatory Commission (PURC) on Thursday.

The PDS in a statement said, “since generation deficit varies, PDS may review the outages depending on the situation upstream [and some] areas may experience outages.”

It also said the outages today are as a result of the shut down of the Atuabo Gass processing plant.

Speaking to PrimeNewsGhana on Friday, April 5 after the release of the dumsor timetable, some Ghanaians say the government should rather find lasting solutions to the power outages (dumsor) rather than releasing a timetable.

Some also believe the timetable will help them plan their day-to-day activities.