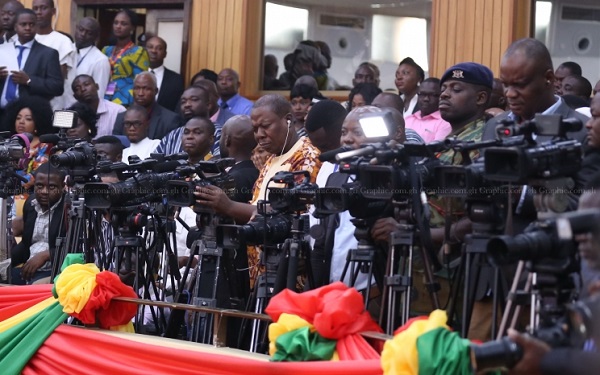 Government has commissioned a secretariat to receive and validate complaints of attacks on media practitioners in Ghana and advocate their rights and freedoms.

The Secretariat, known as: the National Coordinated Mechanism on the Safety of Journalists, would be a centre for media practitioners to report issues of intimidation and harassments in their line of duty for investigation.

It is located at the former offices of the National Media Commission (NMC) in Accra.

Mr Kojo Oppong Nkrumah, the Minister of Information, who cut the tape to officially open the Secretariat, said it formed part of governmentâ€™s commitment towards ensuring the safety of journalists in the country.

He said discussions on establishing a secretariat to promote media safety started about two years ago, which allowed stakeholders to make meaningful inputs.

Mr Oppong Nkrumah said the office would primarily receive and validate complaints of intimidation and harassment of journalists, as well as advocate media freedoms and rights as enshrined in Chapter 12 of the 1992 Constitution.

â€œTwo years ago, we began this conversation on what we can see today. I must say that this is an additional layer of governmentâ€™s commitment to a free media,â€ he said.

Mr Oppong Nkrumah entreated the staff and leadership who would work at the Secretariat to treat complaints with absolute professionalism and dispatch and help deepen collaborations between the media and its stakeholders.

Mr George Sarpong, the Executive Secretary of the NMC, said the opening of the office reinforced stakeholdersâ€™ commitment to the safety of the media.

He said the office would support media practice and freedom, adding: â€œThis will serve as a 'go-to-complain centre' on the safety of practitioners.â€

Mr Sarpong assured the media that the office would seek their welfare and safety, and deal with matters expeditiously.

However, he advised them to be professional in their practice and not necessarily court troubles for themselves in their line of duty.

Deputy Superintendent of Police (DSP) Ms Sheila Kessie Abayie-Buckman, the Director of Public Affairs, Ghana Police Service, said the security services would collaborate with the Secretariat to provide safety for journalists in the country.

She said the Police Administration would do its part in ensuring that the media went about their duties safely.

DSP Abayie-Buckman said the countryâ€™s media were testaments of the thriving democracy and needed to be empowered to play their role effectively in nation building.

Mrs Linda Asante Agyei, the Vice President, Ghana Journalists Association, advised journalists to report to the secretariat whenever they were attacked and not restrict them to the airwaves.

She said the Centre would help stakeholders to get accurate data on attacks on the media and pursue them for the safety of journalists.