Mahama swears in Joe Whittal as new Commissioner of CHRAJ 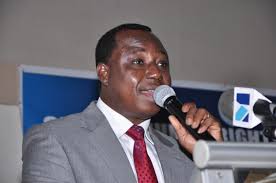 Mr Joseph Whitall, a former deputy commissioner of the Commission for Human Rights and Administrative Justice (CHRAJ) has been sworn-in as the new substantive commissioner.

Mr Whittal, who has been the CHRAJ since 1993 and rose through the ranks to become the Commission's Director Legal and Investigations before being appointed deputy commissioner in July, 2012.

The CHRAJ had been without a substantive commissioner since former boss, Justice Lauretta Vivian Lamptey was sacked last year after it emerged that she had spent over 200,000 dollars on rent at the AU Village while also using over 180,000 cedis to renovate her official residence.

Also sworn in on Tuesday is Ms Josephine Nkrumah, who has been elevated from her status as deputy chairperson of the National Commission for Civic Education (NCCE) to head the commission.