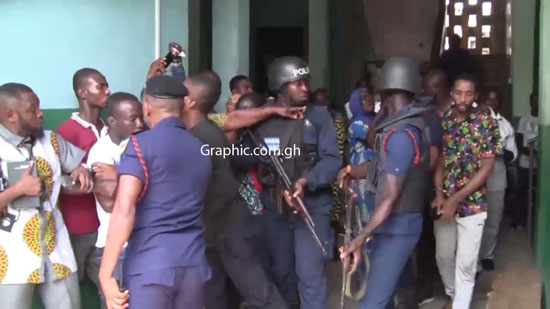 Samuel Udoetuk Wills who is the main suspect in the Takoradi kidnapping was nearly beaten by angry families of the girls in court today.

He had to be shielded by the police from the angry crowd and even abandoned his sandals in court.

The drama unfolded immediately proceedings ended at the Takoradi Magistrate Court where Udoetuk is standing trial for escaping from lawful custody in relation to the disappearance of the girls.

Defying warnings of possible contempt of court charges against them, the ‘eye-red’ family members and sympathisers rained tirades after him as they tried unsuccessfully to tear through a police protection ring ostensibly to manhandle him.

The police managed to whisk him to safety as he ran along with them into waiting vehicles. They sped off as soon as they could, but without his bathroom sandals.

The ‘mob’ action was sparked by the suspect’s failure to produce persons he had claimed helped him to escape from police cells.