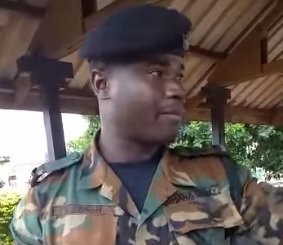 The military hierarchy is said to have locked up a Lance Corporal seen in a viral video speaking against the controversial new parliamentary chamber.

The Lance Corporal in the video cited among other reasons the need for the Parliament to prioritize projects that would solve the massive social infrastructure deficit including the lack of hospitals, schools, potable water and good roads.

According to reports, the alleged locked up officer is likely to spend about a month in detention in accordance with military regulations.

His comments amount to an offence described in the military as ‘disloyalty’.

The Parliamentary Service Board has proposed a new 450-seater chamber for the Parliament of Ghana, which according to them will solve the various challenges faced by MPs in the current chamber.

The proposed chamber did not go down well with the majority of Ghanaians including civil society groups.

The new Chamber is estimated to cost $200m. The chamber, when built, will have a chapel, a mosque, an eatery and garden.