W/R: Gas explosion kills one Chinese, 2 others in critical condition 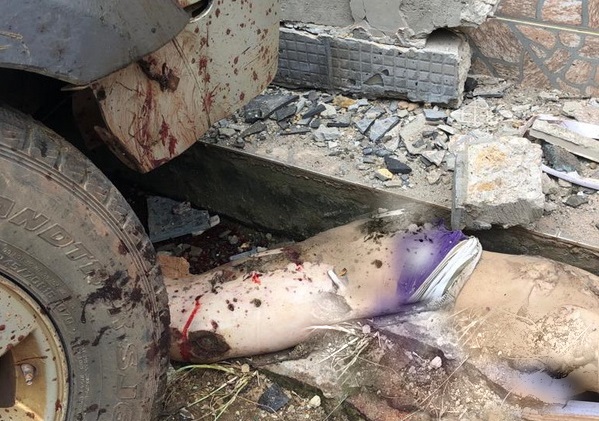 Gas explosion kills one Chinese, 2 others in critical condition
Shares

A gas explosion which occurred at Wassa Akropong in the Amenfi East District of the Western Region has claimed the life of one Chinese national and left two others in critical condition.

Such was the force of the explosion that it exposed the entrails of the dead man and splashed blood all around.

The thunderous sound and plumes of smoke accompanying the explosion sent residents running for their lives, while the rented building the Chinese have converted into an all-purpose workshop from where they undertook welding of machines and metal fabrication also suffered extensive damage.

The police are investigating the cause of the explosion said to have occurred shortly before 11am.

An eyewitness and elder of the community, Mr. George Cobbinah made a report of the accident to the police and said at about 10:30, the two critically injured Chinese nationals, Liung Xan Xen, 52 and Li Fa Ning 43, together with the deceased whose name was not readily available were in the building welding when â€œunfortunately, the gas cylinder exploded killing one instantly and causing serious injuries to the two.â€

He said the resulting debris virtually buried the deceased and smashed vehicles and other properties on the compound.

The two critically injured are on admission at the Wassa-Akropong Government Hospital while the body of the deceased has also been deposited at the mortuary of the same hospital for autopsy.