Here's why the coronavirus may be killing more men than women 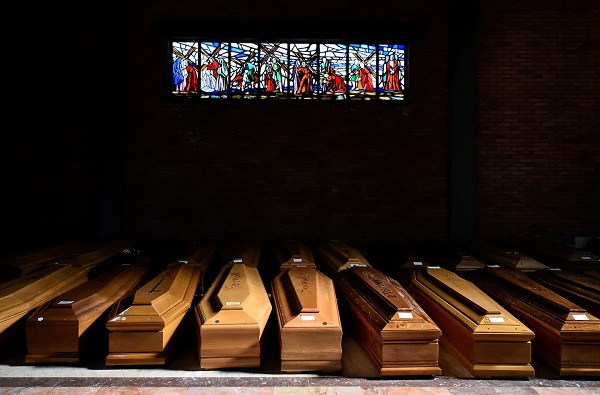 Smoking, drinking, general poor health: Researchers say these are some of the factors that could explain why more men seem to be dying from coronavirus than women.

In countries such as Italy, men represent nearly 60% of people who tested positive for the virus and more than 70% of those who have died, according to the country's National Health Institute (ISS).

Even in countries like South Korea, where the proportion of women who have tested positive for the virus is higher than that of men, about 54% of the reported deaths are among men.

But while health officials are starting to take note of these staggering numbers, the United States is not releasing the basic nationwide data that is crucial to understanding who is most vulnerable to the virus, according to a CNN analysis.

Dr. Deborah Birx, the White House's coronavirus response coordinator, said at a White House press briefing on Friday: "From Italy we're seeing another concerning trend. That the mortality in males seems to be twice in every age group of females."

Regarding this data on Italy, Birx said in an interview with CNN's Wolf Blitzer: "Just having the knowledge of that helps us in the United States so we can be very specific in talking to the American people about who to protect and how to protect them."

When CNN asked the US Centers for Disease Control and Prevention for data split by sex for US cases of coronavirus and deaths by coronavirus, known as sex-disaggregated data, the CDC did not respond.

Comprehensive data about those who have gotten sick could help inform more effective responses to the crisis. But public health researchers say that when governments such as the United States either don't collect, or don't publish their data, it's impossible for experts to gain an accurate sense of what's going on.

Data divided by sex
In collaboration with Global Health 50/50, a research institute examining gender inequality in global health, CNN analyzed the publicly available data from 20 countries with the highest number of confirmed cases of Covid-19 at the time of data collection -- March 20.

The aim was to see why men seem to be dying more than women.

From these 20 countries, only six provided data broken down by sex for both confirmed cases and deaths - China, France, Germany, Iran, Italy and South Korea. A further seven provided such data for the number of confirmed cases only. No sex-disaggregated data could be located for the remaining countries. The research has been submitted for publication and has not yet been peer-reviewed.
The data is not comprehensive in all cases: For example, the figures for China only cover the period through the end of February, well before community spread approached zero. And no reliable data exists on the proportion of tests administered to men versus women in any country. Furthermore, there are undoubtedly cases of the virus that are not reflected in the national data for any country.

But across the countries for which we have data - spanning nearly a quarter of the world's population - we found that men were 50% more likely than women to die after being diagnosed with Covid-19.

While necessarily partial and incomplete, the results highlight what public health experts have been warning for some time, theorizing that it is not only biology but also gendered behaviors -- the different ways in which men and women conduct their lives -- which may play a significant role in the different mortality rate for respiratory diseases.

"When we look at the data what we're seeing is that in every country with sex-disaggregated data ... there is between a 10% and 90% higher rate of mortality amongst people diagnosed with Covid if they are men compared to if they are women," says Sarah Hawkes, professor of global public health at University College London (UCL) and co-director of Global Health 50/50.

"If I was designing clinical guidelines, I would very much want to understand why some people seem to have a much higher risk of mortality than others. It might for example lead to a difference in the way in which we administer clinical guidelines amongst people who have pre-existing health conditions that lead to risk of death along with those with chronic lung disease, who are more likely to be men."

Hawkes also noted that reporting sex-disaggregated data on epidemics has been requested by the World Health Organization since 2007, but many countries fail to do so.

As the US data was not publicly available on a national level, CNN went state by state to request the data, but many did not release it. Even states such as New York and California, where the outbreak is particularly severe, did not provide CNN with the requested data, despite several attempts. In some cases, CNN located the data in press releases from local counties, care homes and hospitals.

"I'm pretty sure that in a country with the sophistication of the health system and the surveillance system that the United States has, that it's not that there's an absence of data," says Hawkes.

"I am fairly sure that down to the smallest districts across the US, people have the data. What we've not seeing happening it seems is a collation, a collection of that data at state and national level with the speed which one might hope to see from the perspective of global health research."

Historically, coronaviruses such as SARS and MERS tended to affect men disproportionately, according to Dr. Luis Ostrosky-Zeichner, infectious disease specialist at McGovern Medical School at UTHealth in Texas.

During previous epidemics, males were reported to have a worse clinical outcome due to SARS in Hong Kong. They also had a higher risk of dying from MERS, in a study conducted in Saudi Arabia and South Korea.

From an evolutionary perspective, some research suggests that women have a stronger immune response against viral infections than men because they spend part of their lives with a foreign body inside -- their offspring -- thus granting them a survival advantage.

"It might have to do with hormonal changes," Ostrosky-Zeichner said. "There is actual research in animals that has shown there may be a biological basis for the sort of increasing susceptibility in the male gender and not only that but also an increased severity and response to the virus."

Pre-existing conditions
Initial reports of people with severe Covid-19 disease have found that they were likely to have underlying health conditions such as hypertension, cardiovascular disease and chronic lung disease, according to Global Health 50/50. These conditions tend to be more common among men in the six countries analyzed as well as globally, the institute said, possibly because of riskier lifestyle choices.
"If Covid-19 is following the same kind of patterns that we see across a range of other diseases, what we know is that men tend to have across their life courses ... greater risks of exposure to behaviors that will lead to adverse health outcomes in the long term," says Hawkes.

"So in most countries, for example, what we see is that men smoke tobacco and drink alcohol at far greater rates than women do," she said.

Smoking is a clear example of how such behavior differs between men and women.

China has the largest smoking population in the world, with around 316 million adult smokers. But while over 50% of Chinese men smoke, less than 3% of women do, according to the Chinese Center for Disease Control and Prevention.

In Italy, 7 million men smoke as opposed to the 4.5 million women, according to 2020 data released by the National Health Institute (ISS)

The institute reported that, upon admission to hospital, "a third more Covid-19-positive smokers had a more serious clinical situation than non-smokers."

For these smokers, the risk of needing intensive care and mechanical ventilation is "more than double.

"If you've got a group of men who have been smokers in their lifetime and then get it [Covid-19] and now have chronic lung disease as a result of the smoking, and then get exposed to corona infection, it seems as if they are more likely to suffer from severe corona infection, and be at risk of death," Hawkes said.

Other studies have shown that Italian men also have higher rates of hypertension than age-matched females, while Chinese men tend to have higher blood pressure and are more likely to have Type 2 diabetes.

All these factors contribute to possible complications if they get the coronavirus, researchers say.

But the lack of data on how many men died of novel coronavirus as opposed to women, Global Health 50/50 researchers say, feels like a missed opportunity for governments to implement public health policies that target certain groups of people who are significantly more vulnerable than the rest of the population.

"What Covid-19 reveals is a classic case of failing to use data for decision making. For every patient there is a record of their sex. But that data is not collated and analyzed with a gender lens," Dr. Kent Buse, co-founder of GH5050 and chief of strategic policy directions at UNAIDS told CNN.

The same view is shared by Arthur Caplan, a bioethicist at New York University,

"All data establishing risk, ability to recover, infectivity is crucial in a pandemic," he told CNN. "Data ought to be collected, transparent as to methods, and disseminated promptly."

For as long as this data is not made publicly available, it cannot be analyzed by outside experts, like Global Health 50/50, for clues on why men seem to be dying more from Covid-19.