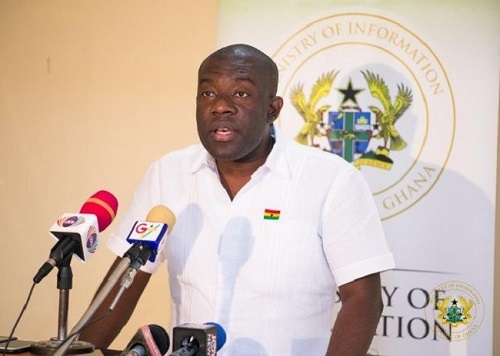 Government says it intends to recruit 600 Right to Information Officers to man information units at Public Institutions before the Right To Information takes full effect next year (2020).

These officers will also be provided with equipment to aid their work.

This is part of the roadmap towards the implementation of the Right to Information Act.

Minister for Information, Kojo Oppong Nkrumah made this known during the first level training for Chief Directors from all the ministries on the Right to Information Act.

The Chief Directors will lead the data mapping services of the Right to Information Act. They will also be schooled on the Data Protection Act.

President Akufo-Addo earlier this year gave assent to the Right to Information Act which was passed by Parliament.

Government then prepared a roadmap for its implementation. The roadmap includes establishing Information centres in all government offices, the establishment of the RTI Commission and completion of various administrative protocols before the commencement of the next fiscal year.

Mr Oppong Nkrumah noted that his Ministry is on course to ensure that the Act fully takes effect next year.

He said the recruitment of the Information officers will also help create employment for some 600 citizens.

Mr Oppong Nkrumah also announced that all budgetary allocation for the roadmap has been given to the Ministry of Finance for approval. He said once the Ministry approves the budget, it will be made known to the public.

Meanwhile, the Chairman of Constitutional Legal and Parliamentary Affairs, Ben Abdallah Banda who gave further clarifications on some critical aspects of the Act said information must be proactively given to the public when they need it except for some information which are exempted.

Government is hopeful to ensure that the Act sees a smooth take off next year (2020).