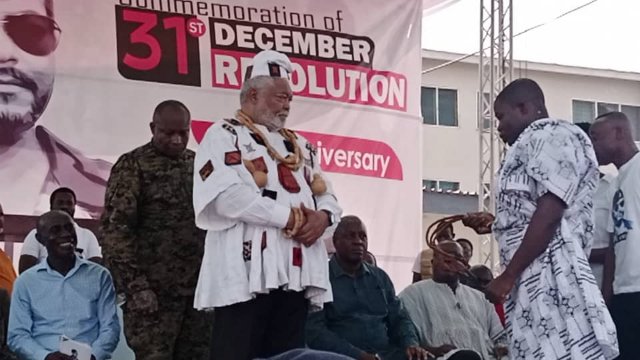 Former President Rawlings says there is a deliberate attempt by some individuals to distort our history by churning out lies.

The President made these remarks when addressing the 38th Anniversary of 31st December Revolution in Winneba.

The architect of the June 4, 1979, and 1981 revolutions said some may not want to speak openly about the truth, “but there are millions alive who cannot forget the dire circumstances that this country found itself 40 years ago when the atmosphere was so fragile and volatile.”

According to him, “An important lesson in history is going to be lost on this nation because a handful of warped minds, full of hate and bitterness are being paid to distort and cover up events in our history with callous stories and lies.

“Why do we sit and allow these perfidious characters to get away with these lies and deceitful machinations through the power of the media all to the detriment of the nation?” he quizzed.

"We should not allow the distortions of our history to continue."

Mr Rawlings recently had a verbal war with Major (Rtd) Ibrahim Rida after Joy News premiered their 'Scars of the revolution' documentary.

The former Squadron commander who was almost killed during the June 4th uprising last week narrated to JoyNews’ Raymond Acquah on ‘UPfront’ the reason behind Mr Rawlings bitterness in the running to his first coup attempt.

He says Rawlings was hurt by his superiors after being asked to refund $4,000 he had wasted.

Major (Rtd) Rida narrating some of the primary causes of Mr Rawlings’ anger, the former Squadron commander said the $4000 was given to the junior rank officer to pay for the cost of a 4-month training course in Pakistan.

According to Major Rida, unknown to the military, the training course had been called-off and Rawlings had to return the cash given.

“He took the money and went round galavanting in Europe,” he recalled referencing a Military Service report.

He said the Armed Forces Command went ahead to deduct the monies from Mr Rawlings’ salary.

Mr. Rawlings denied the claims by Major (Rtd) Ibrahim Rida that he was hurt by his superiors after being asked to refund $4,000 he had wasted.

In a strong-worded statement Sunday, Mr Rawlings said he did not recall being asked to pay back some $4000.

He described Major (Rtd) Rida as a treacherous person and asked him to stop spewing lies to distort history.

‘Scars of the revolution’ discloses the act of savagery leading to and the aftermath of one of the country’s darkest moment in history, the June 4th uprising.

READ ALSO: Disregard media reports, I did not write to Gov't about Volta secessionist group - Rawlings