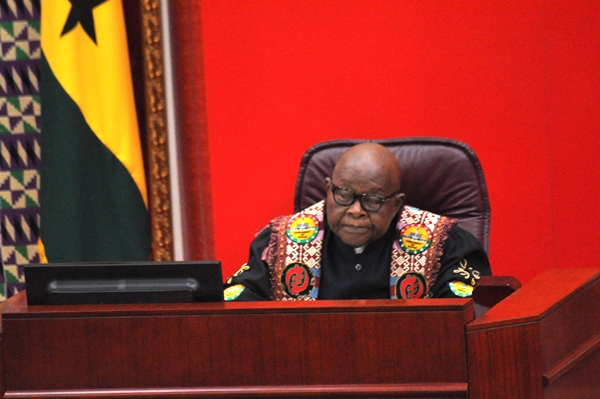 The Speaker of Parliament, Prof. Mike Ocquaye has dismissed an attempt by the Minority Leader, Haruna Iddrisu to haul three Ministers before the House over the recent floods in parts of Ghana.

Invoking order 72 of the Standing Orders of Parliament, Mr. Iddrissu said in view of the huge public interest and the casualties involved, it is necessary for the Ministers responsible for Works and Housing, Roads and Highways and Finance to come before the House and give assurance to the public of the steps being taken to forestall future occurrence.

The Minority believes that these three Ministers Samuel Atta Akyea (Works and Housing), Ken Ofori-Atta (Finance) and Kwasi Amoako-Atta (Roads and Highways) should appear before the House and announce steps been taken to ensure that they curb the flooding issues in the country since it was becoming worse by the day.

READ ALSO: Minority demands answers from Ministers for Works and Housing, Finance and Roads and Highways over recent floods

However, the Speaker said, Mr. Iddrisu’s request is not in line with an agreement reached among the Leadership over the issue.

Early on, MP for Builsa North, James Agalga sought to find out from the Minister for the Interior, the status of the National Disaster Fund provided for in the NADMO Act to deal with disasters.

In response, the Minister, Ambrose Derry explained that an Account was opened with UNIBANK, now Consolidated Bank, in 2017, but was unable to state the total money which has accrued to the account as of today.

The Minority Leader, Haruna Iddrisu who was not satisfied with the response from the Minister, asked a follow-up question about the level of compliance with the law with respect to the sources of funds, with special emphasis on the three percent share of the District Assemblies Common Fund.