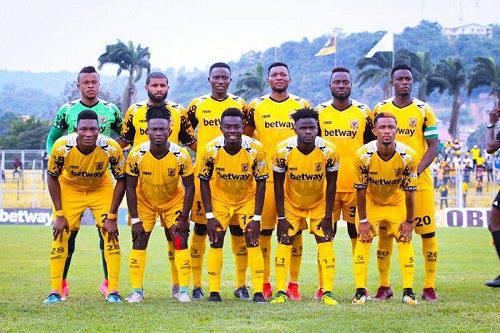 Chief Executive Officer of AshantiGold, Emmanuel Frimpong says his outfit is 85% ready to compete in the CAF Confederation Cup.

Speaking to Kumasi based on Nhyira FM monitored by PrimeNews, Frimpong shared that the Obuasi based club can't wait for the competition to commence.

However, the club's defender Eric Donkor thinks otherwise. According to the former Asante Kotoko player, his team lacks shape and unity because of the lack of football activities.

But the CEO claims the player is not ready due to the fact that he hasn't not been following his coach's instructions.

"For Eric Donkor to say AshantiGold is not ready for Africa, it means he himself is not ready not the club. AshantiGold has a lot of talented players. I am sure he doesn't train at home, he doesn't do what the coach sends them to do at home. - Emmanuel Frimpong told Nhyira FM."

The Miners will be hoping to fare better than they did last time around in the CAF Confederation Cup.

The club’s last participation in Africa in the 2019/20 CAF Confederation Cup came to an abrupt end in the preliminary stages after they got eliminated by Moroccan club RS Berkane.

Frimpong has revealed that their target is to reach the last four.

"Our target is Semi-Finals & the target is realistic. We want to make AshantiGold one of the best clubs in Africa. We want to make Ghanaians proud. We will come back with a victory. We are actually ready for the CAF Confederations cup.

AshantiGold have beefed up their team with new additions ahead of the competition. They have signed 2016 MTN FA Cup best player Yaw Anorl from Bechem United and 2016/17 Ghana Premier League top scorer has rejoined the club.

Meanwhile, the club is in talks with Latif Anabila and James Akaminko to renew their contracts.

The Ghana Football Association have announced that AshantiGold and Asante Kotoko will be representing Ghana in the Confederation Cup and Champions League respectively, following the cancellation of the 2019/2020 football season.