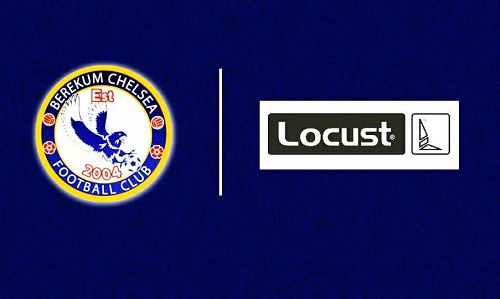 Locust replaces South African based sportswear company Laurus who have been kitting the Berekum based side in the last two seasons.

They will be providing the Berekum based club with jerseys, bibs, training equipment and other sports apparels.

A statement on the club's feed read: Berekum Chelsea announces today its newest Technical Partner Locust which represents the largest commercial deal in the clubs' history. The sports footwear and apparel company becomes the clubs, official kit supplier, for the next 4 years. Locust will produce strips for the first team and our youth team as well as a full range of clothing for our supporters around the world.

Speaking after the two parties have reached an agreement, Berekum Chelsea President Mr Obed Nana Nketiah said: ' This is an important deal for the club, like Berekum Chelsea, Locust is known around the world for its excellence in clothing and we look forward to this working relationship in what is sure to be a successful partnership. We believe Locust will be able to support our growth into the new markets and we will also be able to support their growth into the Ghanaian markets, Locust will also help us maintain our place among the African elite football clubs.

Mr Kojo Owusu Ansah representative of Locust brand added:" Berekum Chelsea is one of the best clubs in Ghana and known in Africa with a rich tradition and passionate fans across Ghana and Africa, with this partnership with Berekum Chelsea, enforces our commitment to grow our leadership in football. We are excited to help them grow, serving the club and supporters with great Locust designs."