Mourinho unhappy with VAR after Spurs held by Man United 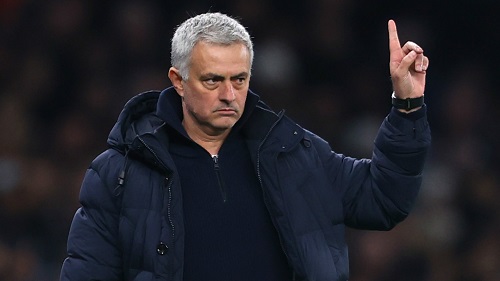 Jose Mourinho pointed the finger of blame at VAR as his Tottenham Hotspur side were denied a Premier League victory against Manchester United by a late penalty on Friday.

Spurs were on course for three valuable points in the race for a Champions League qualification slot when David de Gea failed to keep out Steven Bergwijn’s first-half strike.

But Bruno Fernandes’s 81st-minute penalty after Paul Pogba was bundled over by Eric Dier made sure United went home with a 1-1 draw to stay fifth, four points above eighth-placed Spurs.

It could have been worse for Tottenham but another United penalty in stoppage time was rescinded by VAR after Fernandes went down under apparently no contact from Dier.

“I am unhappy with the VAR, not the referee on the first, the referee can make a mistake but VAR is there to do the job.

“In the second I am unhappy with (referee) Jon Moss because he did not give the free kick leading up to it and then gave another penalty. In this case the VAR gave the truth.

“We knew that we could have a penalty against because we know they have an incredible record of penalties given.”

Mourinho also said VAR should have been used to book Fernandes for simulation after appearing to fall theatrically.

While the Portuguese coach was left frustrated against the club that sacked him last season, United manager Ole Gunnar Solskjaer praised Pogba who came off the bench in the second half for only his ninth appearance of the season.

The France midfielder has been sidelined by ankle injuries and had not appeared since January, but sparked United into life when he replaced Fred just past the hour mark.

“Paul did everything a midfielder should do, he tackled, won passes and showed some skills so fantastic to have him back,” Solskjaer told reporters.

“He’s had a frustrating season with his injuries. Paul has shown today how he can contribute and I just look forward to getting him fitter and seeing Paul getting back to his best.”

Solskjaer paid tribute to United’s fitness staff as his side ended the match strongly. Mourinho, however, said his players had grown tired towards the end of a fast-paced game.

“I liked my team performance for 70 minutes, I felt we were in control and I felt we gave them the kind of game that they don’t like very much,” he said.