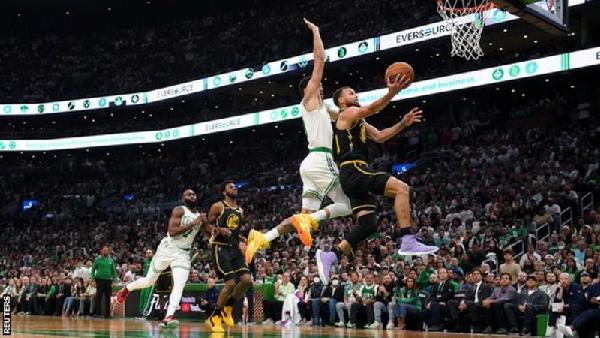 Stephen Curry scored 43 points for the Golden State Warriors as they beat the Boston Celtics 107-97 in game four to level the NBA Finals at 2-2.

Boston led 94-90 with just over five minutes left but 10 consecutive points helped the Warriors to victory.

Curry scored seven three-pointers from 14 attempts and did not appear troubled by a left foot injury sustained in game three of the best-of-seven series.

"I don't rate my performances. I just want to win the game," said Curry.

"For the most part, I didn't think of [the foot]. It doesn't take up too much mental space. I felt like I could do what I wanted on the court."

Curry is averaging 34.3 points in the series and has made 25 of 51 three-point attempts.

"Steph has carried us through so many lulls," said Thompson. "Come game five, we're going to have to help him out. Asking him to score 43 nightly is ridiculous.

"It's just special to watch what he does. He does it so often that you kind of take it for granted. But I'm mesmerised just like the rest of the crowd was. It looks effortless."

"You have to give them credit, they hit some big shots," he said.

"We obviously felt like we had put ourselves in position to win the game and there are a lot of things we wish we had done differently."

Game five of the series is on Monday evening (02:00 BST on Tuesday) in San Francisco.