Pay cut decision should not be unilateral - Yahaya Mohammed 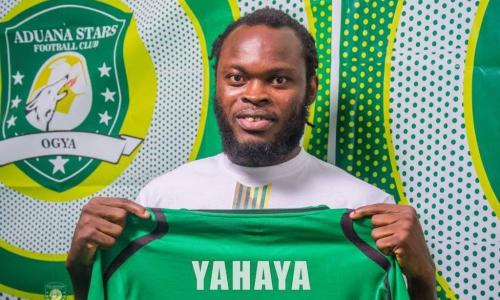 The 32-year-old speaking to Kumasi-based Sikka FM said clubs need to dialogue with their players if they intend slashing down the salaries of their employees.

He adds that he will be the first person to allow his salary to be slashed if the Dormaa-based team's management decide to have a dialogue with him.

"Issues of pay cut should be a consensus between players and Management of clubs," Yahaya Mohammed told Sikka Sports. "I will be the first person to accept pay-cut at Aduana Stars," he added.

The issues of pay cut have generated a lot of talk in the country since the league was suspended due to the Covid-19 pandemic and the Professional Footballers Association of Ghana have also waded into the debate.

According to the PFAG, who seek the welfare of players in the country, clubs need to go to the round table with their players before slashing their pay amid the Covid-19 crisis.

A statement read: "Our attention has been drawn to reports from some of our members and news in the media of clubs pushing to implement pay cuts without dialogue with the players."

"Being minded by the present situation - COVID 19 challenges, the PFAG believes the best way forward is an open dialogue and concensus building approach. The PFAG would be grateful this matter can be resolved with the input of the players.

"Such unilateral decisions do not augur well for the future of our game."

The Covid-19 pandemic has plunged a lot of economies into financial difficulties affecting clubs as a result.

The outbreak of the disease has led to the suspension of football activities in the countryÂ as club owners and administrators begin to take drastic decisions to ease their financial burden.

Europeans clubs like Barcelona, As Roma, Juventus among others have seen their players taken pay cut.

However, George Amoako is of the view that in as much as the outbreak has really affected the revenue generation of clubs, they just cannot slash the players salaries with having a dialogue with them.

In an interview with Kumasi based Nhyira FM, he said the contract they have with individual actors makes it impossible for the club to force any policy on the players if they are not willing to do it.

â€œPay cut is under review and nobody can force it on the neck of the playing body. Players have a contract with the club and all over the world a pay cut is based on negotiations and agreement.â€