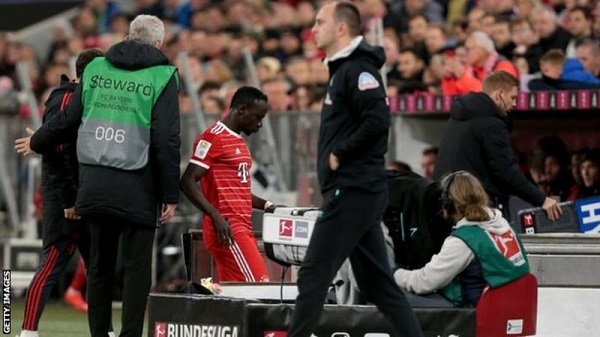 Sadio Mane will undergo an X-ray to determine the severity of his injury less than two weeks before the World Cup.

The Bayern Munich star was forced off in the first-half of his side's Bundesliga clash with Werder Bremen, sparking fears about his involvement in Qatar. Mane went down and immediately called for the medical staff amid concerns over an issue in his leg.

Bavarians boss Julian Nagelsmann has since confirmed that the 30-year-old, who is his country's talisman, will have an X-ray after he was withdrawn just 20 minutes in. The Bayern tactician said, as per Eurosport, that Mane "took a knock to the head of his tibia. It's always uncomfortable. He has to have an X-ray. I hope nothing is wrong. I didn’t see him after the game, I hope it’s not a big injury. But I don’t know at the moment. We’ll see tomorrow and then give an update."

Nagelsmann's assistant boss Dino Toppmoller is more upbeat however, stating: "He got hit in the leg, which caused a little nerve pain. Nothing too serious. His participation in the World Cup shouldn't be in jeopardy."

Bayern strolled to a comfortable 6-1 victory over Bremen with Serge Gnabry bagging a hat-trick as they maintained top spot in the Bundesliga with their fifth successive league win. Mane is highly unlikely to feature in his side's final game before the World Cup - an away trip at Schalke.

The 30-year-old's major concern will be ensuring he is fit for Senegal's World Cup opener against the Netherlands on November 21. The African nation will go to Qatar as their continent's champions following their Africa Cup of Nations triumph back in February. They saw off Mohamed Salah's Egypt in the final and also beat them in a play-off to make the World Cup.

Senegal will also face Qatar and Ecuador in their group campaign as they look to make the knockout stages. Should Mane and Co finish second in their group they could take on England in the last 16, provided the Three Lions win Group B.

The former Liverpool star recently played down his country's chances of glory in Qatar as told RMC Sport : “I don’t see Senegal as a favourite because there are other nations very far ahead of Senegal like France, Spain. We will go there with no cold and try to do what we have used to do.”

Despite that, Samuel Eto'o, one of Africa's greatest ever players, has recently backed two of his continent's nations to contest the final in Qatar despite no African team ever making it to the showpiece event. "Africa has always had the potential to achieve a successful World Cup, but we haven't always shown our best face up to now," he told ESPN.

"During the years, African teams have acquired more and more experience, and I think they're ready not only to participate in a World Cup, but also to win it. Cameroon will win the World Cup final against Morocco."