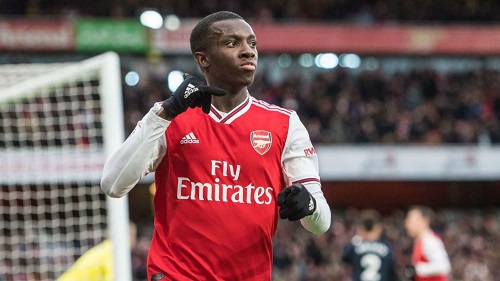 Black Stars coach Charles Kwablan Akonnor has revealed that he and the Ghana Football Association are working around the clock to get Arsenal star Eddie Nketiah to play for Ghana.

The Arsenal forward qualifies for the West African nation through both of his parents, but has served England at youth level having been born in London.

Nketiah has shot to prominence this year with some impressive displays for The Gunners after returning from a loan spell at Leeds.

Since his return he has been a regular performer under Mikel Arteta, scoring four times in 17 appearances, and came off the bench in Saturday’s FA Cup final win over Chelsea.

After the said match GFA congratulated the 21-year-old for aiding his club win the FA Cup. A tweet many attributed it as a form of persuasion by the GFA for the attacker to come and represent Ghana.

However, Henry Asante Twum who is the Communications Director of the GFA said all the country's governing football body did was to congratulate him for aiding his club to victory and they are yet to reach him over switching his nationality.

He added that, before the GFA will make an approach for Nketiah it will be on the call of Black Stars head coach CK Akonnor.

“The player tweeted and we re-tweeted and congratulated him for winning the FA Cup, that’s all but I am unaware of any negotiation going on to help the guy to switch nationality,” he told Graphic Sports.

“Before the FA would seek for his nationality switch a request must first come from the coach, then the FA would look into it and engage the player,” he stressed.

And Black Stars coach CK Akonnor has hinted that he has given his approval for the lad to play for Ghana and has been engaging the GFA to get the player for play for Ghana.

Speaking to Starrr FM, Akonnor said, "We've been able to talk to Eddie Nketiah's parents. But even though we've tried, it doesn't mean it's a done deal. Myself and Ghana Football Association are working hard at it"