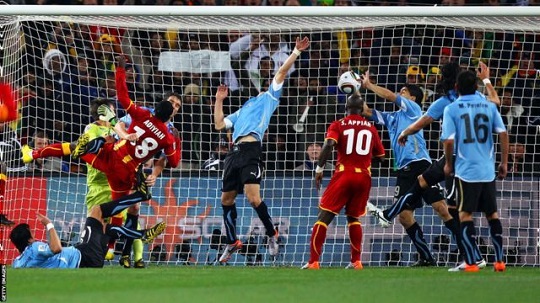 The Black Stars of Ghana will later today hope to reach the last 16 of the World Cup 2022 when they come face-to-face with Uruguay.

The match is a crucial one as it will decide both teams' fate ahead of the knockout stage set to commence tomorrow.

The two sides are in search of a ticket to the Round of 16 with Ghana needing a win to automatically seal their spot in the next round of the tournament whiles the Uruguayans are desperately in need of a win against Ghana to progress to the next round.

The game will be a repeat of the 2010 World Cup quarter-final incident which saw Luis Suarez save his side with the handball incident as Ghana eventually bowed out of the tournament on penalty shootouts.

Nonetheless, Black Stars head coach Otto Addo they do not have revenge in mind but going into the game with a winning mentality to qualify to the next round.

"Yeah just like every other match, surely we want to win this game, the good thing is even if it’s a draw", he told ghanafa.org.
"I'm not really thinking about revenge, for me it’s a normal game. For me I was also sad when I watched the scene, it was a big chance for Ghana to proceed to the next stage''.

"But It's 12 years ago, now it’s a different match with different approach. So, I don’t see it as a revenge. I am not a person who is seeking for a revenge and as a strong believer, if you don't seek for revenge for these things, sometimes you get more blessings from God. We try to do our best to win this match and we are confident we can beat them", Otto Addo added.

Luis Suarez is confident Uruguay will beat Ghana because they have done it before.

He insisted that he will apologise for defending his nation in the 2010 quarter-final match incident against the Black Stars.

The former Barcelona and Liverpool striker said the referee applied the rules of the game by punishing him for handling the ball on the goalline and he can't be held responsible for Ghana failing to take advantage of the resulting kick.

The match is scheduled for a 3 pm kick off at the Al Janoub Stadium,