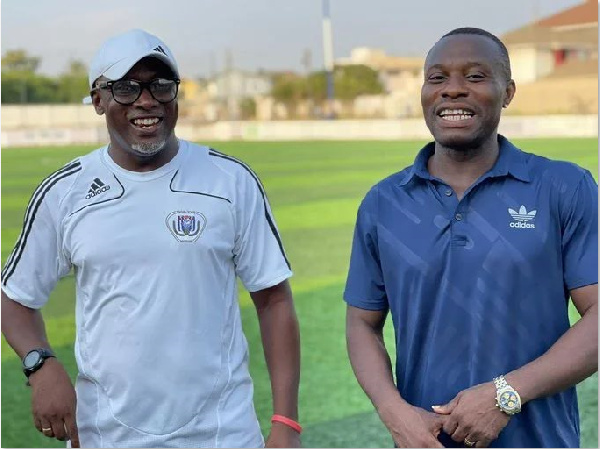 Yaw Preko has opened his Great Olympics account with a 2-0 Accra derby win against Inter Allies on Friday.

Preko took over as Great Olympics boss earlier this week from Annor Walker who is indisposed, with the 46-year-old leading the club until the latter his well to be in the dugout.

A brace from Maxwell Nii Abbey at Accra Sports stadium ensured the former Ghana U-20 coach began his Olympics tenure on a good note after a three-year absence from top-flight football.

Yaw Preko's men are now back into the top four - just a point behind leaders AshantiGold SC.

Olympics captain Gladson Awako solidified his position as the bona fide great of the club after another superb display against their rival rivals.

Allies made one change to the starting XI that lost 1-0 at Berekum Chelsea after Mohammed Zakari replaced Paul Abanga.

Kingsley Braye produced the first moment of quality on 14 minutes when his in-swinging shot was saved by the Olympics goalkeeper.

Another opportunity followed soon after, this time for Nafiu Sulemana, who spun on an incisive ball from Richmond Lamptey and dispatched a shot that was claimed again by the shot-stopper.

Olympics took the lead through Maxwell Nii Abbey in the 9th minute after Desmond Abanga was adjudged to have committed a foul in the 18-yard box.

Olympics continued to press forward and in one of those powerful drive, the ball struck the hand of substitute Ernest Adu -leaving referee Musah Mubarik with no choice but to award a second penalty to the home side.

Again, Maxwell Nii Abbey elected himself and displaced goalkeeper Rashid Seidu to make it 2-0 with 10 minutes left on the clock.

The result takes Olympics back into the top four after nine matches while Inter Allies continue to stay in the drop zone.