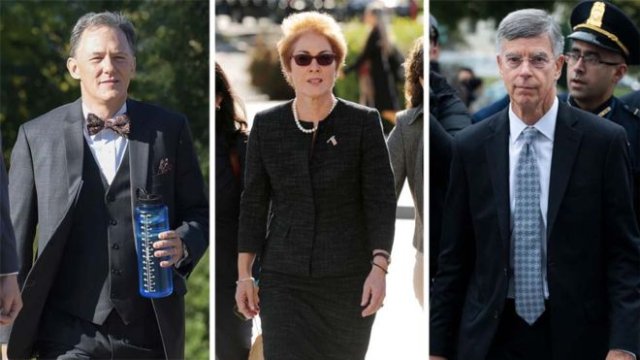 George Kent, Marie Yovanovitch and Bill Taylor have all testified in the ongoing impeachment inquiry

Congressional Democrats have announced the first public hearings next week in an inquiry that may seek to remove President Donald Trump from office.

House Intelligence Committee chairman Adam Schiff, who is overseeing the inquiry, told reporters on Wednesday that an impeachment case was building against the president.

He said: "We are getting an increasing appreciation for just what took place during the course of the last year - and the degree to which the president enlisted whole departments of government in the illicit aim to get Ukraine to dig up dirt on a political opponent."

Mr Trump has been making discredited corruption claims about former US vice-president Joe Biden, whose son Hunter Biden once worked for a Ukrainian gas company.

The Capitol Hill hearings will now be broadcast live, with both Democratic and Republican lawmakers questioning witnesses.

One of the first to appear will be Bill Taylor, acting US ambassador to Ukraine, who delivered some of the most explosive private testimony last month.

On Wednesday - a week ahead of his scheduled public hearing - House Democrats released a transcript of his evidence.

It shows Mr Taylor told lawmakers it was his "clear understanding" that the president had withheld nearly $400m (£310m) in US military aid because he wanted Ukraine to investigate the Bidens.

Joe Biden is a Democratic front-runner for the presidential election a year from now.

Mr Kent reportedly told lawmakers that department officials had been sidelined as the White House put political appointees in charge of Ukraine policy.

He testified that he had been warned to "lay low" by a superior after expressing concern about Mr Trump's personal lawyer Rudy Giuliani, who was lobbying Ukraine to investigate the Bidens. Mr Giuliani has denied wrongdoing.

Former US ambassador to Ukraine Marie Yovanovitch, who was recalled in May after falling from favour with the White House, is due to testify on Friday next week.

She told the hearing last month that she had felt threatened by Mr Trump's remark to Ukraine's president that was "going to go through some things".

What we know about Biden-Ukraine corruption claims

The military aid to Ukraine was released in September, after a whistleblower raised the alarm about a 25 July phone call in which Mr Trump asked the Ukrainian president to investigate the Bidens.

Quick facts on impeachment
Impeachment is the first part - the charges - of a two-stage political process by which Congress can remove a president from office.

If, following the hearings, the House of Representatives votes to pass articles of impeachment, the Senate is forced to hold a trial.

A Senate vote requires a two-thirds majority to convict and remove the president - unlikely in this case, given that Mr Trump's party controls the chamber.

Only two US presidents in history - Bill Clinton and Andrew Johnson - have been impeached, but neither was convicted.

President Richard Nixon resigned before he could be impeached.