A look at 2019 top Prime News headlines in Politics 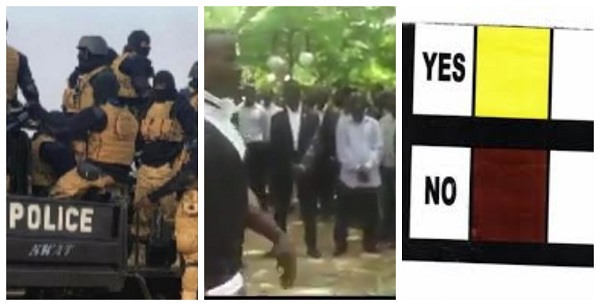 The year 2019 has produced several major political headlines which will forever stay in the minds of many Ghanaians.

From the Ayawaso brouhaha to John Dumelo winning NDC slot to stand as an MP to John Mahama's boot for boot comment, the year had it all.

Prime News has sampled some top headlines in Politics that got the nation talking.

The by-election in Ayawaso in January was characterized by violence.

Footages from the Ayawaso West Wuogon La Baweleshie Presby polling station showed how some suspected security personnel were seen beating and intimidating some voters who were later identified as NDC supporters.

MP for Ningo-Prampam, Sam George has been captured being beaten by the security personnel.

This led to the NDC pulling out of the election and subsequently Lydia Alhassan of NPP was declared winner.

The NDC pulled out of the Ayawaso West Wuogon by-election following shootings at the La Baweleshie Presby polling station on that same day.

The NDC called on all party members to restrain from voting, and the polling agents should converge at the party headquarters for further instructions.

NPP candidate for Ayawaso West Wuogon by-election Lydia Alhassan was announced winner of the elections despite all the chaos.

Official results released by the Electoral Commission show the late MPs wife polled 12,030 out of the total 17,448 votes cast, leaving the NDC’s Delali Kwesi Brempong with a paltry 5,299 votes.

4. Nobody can beat NDC in unleashing violence - John Mahama

John Mahama sounded a note of caution to the New Patriotic Party (NPP) to respect democracy or be faced squarely in the 2020 general elections.

Mahama in February was in the Volta Region campaigning ahead of the NDC primaries and said they (NDC) were going to match NPP boot for boot. This comment was condemned by several civil groups and he later clarified the comments.

The Criminal Investigations Department (CID) of the Ghana Police formally invited the National Chairman of the opposition National Democratic Congress (NDC), Mr Samuel Ofosu Ampofo to assist with investigations into the leaked tape in which he was said to be conspiring with party members to harm political opponents.

Mr Ofosu Ampofo came under fire over comments he allegedly made in the secret recording. On the recording, a voice believed to Mr Ampofo's is heard urging people to take the Chairperson of the Electoral Commission, Mrs Jean Adukwei Mensa to the 'cleaners'.

The voice also endorsed verbal attacks on the National Peace Council Chairman, Most Rev. Prof. Emmanuel Asante. The audio tape also suggests that abductions and kidnappings could be used to silence political opponents.

He has been to court on several occasions and the matter is still not over.

After the referendum in December 2018, President Akufo-Addo on February 12, 2019, presented the Constitutional Instrument (CI) for the creation of the new six regions.

A letter which contains plans by the Upper West Regional Coordinating Council and its Regional Security Liaison to recruit and train New Patriotic Party (NPP) activists for the 2020 election leaked in February.

The letter which is addressed to the NPP constituency chairman in the Upper West region said the activists after their training will be known as “Election Security Team".

On February 14, the Emile Short Commission of Inquiry held its first public hearing.

The Short Commission was tasked by President Akufo-Addo to probe the violence that marred the Ayawaso West Wuogon by-election.

Several witnesses were present and the Commission later concluded investigations and submitted its report to the President.

9. Mahama beats 6 others to emerge NDC flagbearer ahead of 2020 elections

Former Joy News Reporter Manasseh Azure Awuni premiered a documentary that alleged that the NPP were training militia group at the Osu Castle.

The group were called the De-Eye Group. The NPP distanced itself from the group and the issue became a legal one. After several back and forth the NMC ruled that Manesseh's expose was misleading.

There was an outrage on social media on March 25 when Parliament observed a minute silence for victims of the tragic shooting in New Zealand but there was no tribute on Ghanaian tragedy that left 62 passengers dead at Kintampo.

The MPs also paid tributes to victims of a natural disaster in Southern Africa in which a cyclone left in its wake over 750 deaths and displaced in devastated infrastructure.

The House later explained that MP was still in her constituency dealing with the aftermath of the accident and thus, commiserations were shelved until her return.

The NPP and NDC in March agreed to allow the Peace Council to mediate the process in the fight against vigilantism.

Since then both parties have had several meetings as they try to bring an end to political vigilantism.

Marricke Kofi Gane a citizen of Ghana in March also declared his intentions to contest the 2020 general elections as an Independent Presidential Candidate (IPC).

He is a Chartered Certified Accountant working as an International Development expert, something he has been doing globally in more than twenty (20) countries including Ghana.

The EC chairperson Jean Mensa stated that she was sure the commission owed no political parties an explanation in that regard but went on to explain that it was cost-effective for the commission to acquire new machines than to upgrade the old ones. While at it, there was an ‘obstruction’ in the conference room. In her attempt to put the room to order, Mr Nketiah took offence, claiming he was not part of those who were being disruptive.

The Minister of State at the Office of the President Rockson Bukari resigned from his post.

His resignation comes on the back of a circulating tape which suggests that he attempted to bribe a Starr FM reporter to kill a story against a judge and the Shaanxi Mining Company late 2018.

Mr Bukari is a statement has explained that he never attempted to bribe the journalist but rather wanted to make peace.

In May, Professor Edmund Delle stepped down as the Chairman of the Convention People’s Party (CPP).

Stating the reason for Prof. Delle’s resignation, a statement indicated that he resigned from the chairmanship of the CPP following‘the ancestral call to lead his people as the Paramount Chief of the Nandom Traditional Area’.

President Akufo-Addo on May 1 launched a charter to guide the 'Ghana Beyond Aid' campaign during the May celebrations.

The charter launched by President Akufo-Addo is to present the meaning, purpose and the calendar of implementation that will allow Ghana to reach the goal of developing the country, not through dependence on aid from development partners, but through available natural resources.

He said “Ghana Beyond Aid is setting our nation on an irreversible pathway of development. With the blessing of the Almighty and our collective effort, we will march boldly from poverty to prosperity so that we can create the Ghana our forefathers envisaged…”

June did not start so brightly for President Akufo-Addo as a Gender activist Dr Alaa Murabit who is UN’s High Commissioner on Health Employment and Economics at the Women Deliver Conference in Canada was not too pleased with President Akufo-Addo’s submission on women empowerment in Ghana as she heckled the president on several occasions.

The Minister and Ghana's ambassador to China with other officials of the Ministry and a Chinese official were captured in a video cutting through the national clours with the black stars in the middle during a sod-cutting ceremony to officially open Ghana’s consul in Guangzhou, China.

The first person to raise concern over the issue was the Member of Parliament for Kumbungu, Ras Mubarak in a Facebook post on his wall.

On July 8, Parliament bowed to intense pressure from the public and dropped the idea to build a new 450-seater chamber.

The chamber which was estimated at $200m was proposed to be built but received a lot of negative reactions from the public.

On August 19, John Dramani Mahama who is the flagbearer for the National Democratic Congress (NDC) moved swiftly to deny reports that he has appointed Professor Kwesi Botchwey as his running mate for the 2020 general elections.

Mr Botchwey, however, has been strongly tipped to become the running mate of Mahama.

President Akufo-Addo finally assented to the new illegal mining law which pegs sentences for offenders between 15 to 25 years on August 20.

Actor and Politician John Dumelo was elected as the parliamentary candidate for the Ayawaso West Wuogon during the primaries of National Democratic Congress, NDC.

John Dumelo at the end of the polls had 758 and Suzzy Efua Adoboe 99 votes.

Dumelo will represent the NDC in the 2020 elections for the Ayawaso West Wuogon.

September brought a lot of drama when Asantehene, Otumfuo Osei Tutu II, revealed that the Manhyia Palace intervened to persuade the losing candidate in the 2016 general elections to accept defeat.

This did not go down well with Mahama and the NDC as they denied the claims. This resulted in a heated moment between some Asante youth groups and the NDC but the issue was solved amicably.

The Economic Intelligence Unit (EIU) report has predicted victory for the ruling NPP in the 2020 general elections.

According to the report, the governing New Patriotic Party (NPP) led by President Nana Akufo-Addo will retain power come the 2020 polls.

Government on September 23 announced that announced a planned attack on the Jubilee House has been detected and foiled by a combined team of CID and BNI operatives.

The statement said three people including a gun manufacturer have been arrested in connection with the operation.
Later more security officers were arrested and are currently standing trial.

28. Rawlings and Kufuor take leadership in this country to another level

The two elderly statemen and former Presidents of Ghana, Jerry John Rawlings, and John Agyekum Kufuor took leadership of this country to another level by consistently trading 'insults' on each other.

The two former Presidents accused each other of various but often unfounded reasons.

On November 5, the National Democratic Congress (NDC) has provided a list of 51 relatives and cronies within the Akufo-Addo government.

The President later denied these allegations and said there are only three of his family members working in his government.

President Akufo-Addo on December 1 called off the December 17 referendum.

The December 17 Referendum was to amend Article 55(3) of the 1992 Constitution to enable Metropolitan, Municipal and District Chief Executives (MMDCEs) and unit committee members to be elected along political party lines.

The President who addressed the nation said a broader consultation will have to be done before the process goes ahead.

The NPP later commented on the IMANI's report and said they have done far better than what was given them.