Ariana Grande has returned to the UK days after she left traumatized following the terror attack carried out at her concert. The singer returned for a benefit concert for the victims of the terror attack which will hold on Sunday.

Primenewghana.com can confirm the star, popularly called Kwaku T, was involved in a domestic fire incident that nearly took his life a little over a month ago, at his base South Africa.

Our sources say the fire injured a substantial part of his right arm and right side of the face. He remained unconscious for several hours at hospital, following the accident. 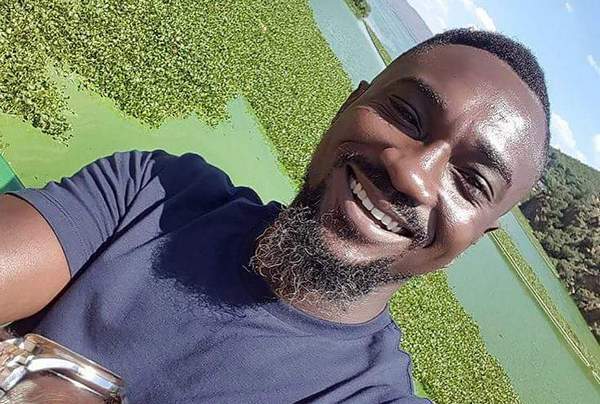 A Facebook post on Thursday by his younger sister, Adwoa Tutu, seemingly confirms the showbiz personality was indeed at the brink of death after the accident.

Parts of the post read “this Easter a lot changed in his and my family's life. He's had a number of near death accidents but I was super sure this one was gonna be it. I remember going to my husband...and telling him I'm sure my brother is dead…long story short, he was half gone some 7 weeks ago but by some miracle he's alive, breathing on his own and recovering fast.

Kwaku Tutu is believed to be back in Ghana recuperating under the care of his mother. 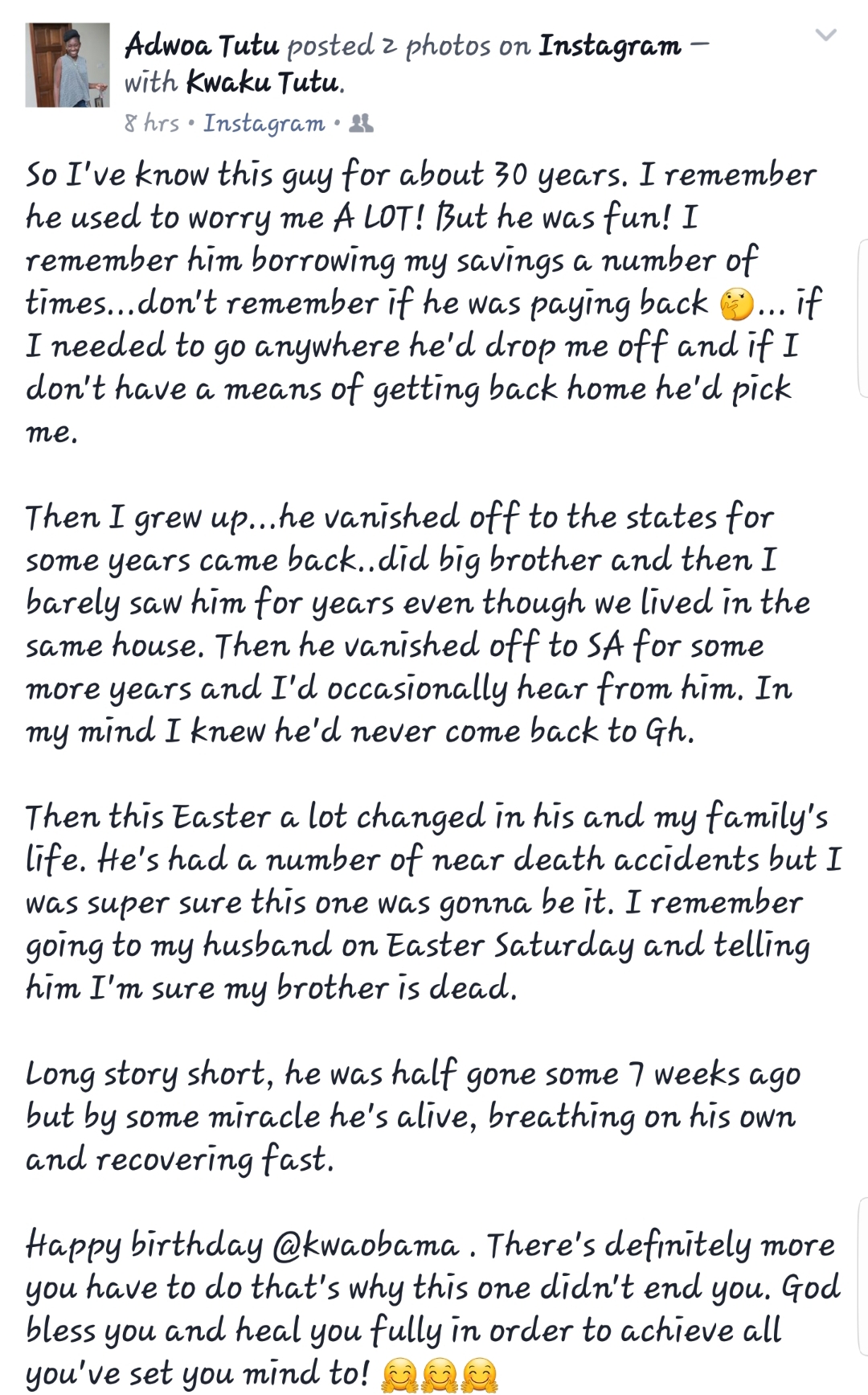 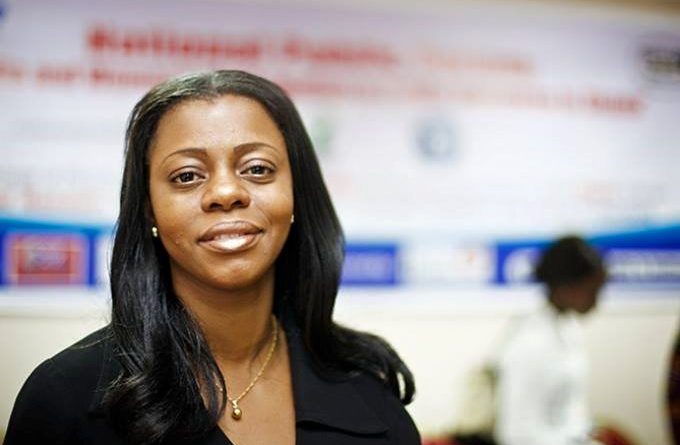 Primenewsghana sources suggest that Joy FM’s Dzifa Bampoe would be moving to the corporate world following her resignation from the Multimedia Group.

Ghanaian dancehall artiste, Shatta Wale, has released a tribute song for the military officer who was gruesomely murdered Monday at the Central Regional town of Denkyira-Obuasi.

After a weekend of outstanding musical performances at the Ghana meets Naija concert,  many on social media continue to discuss incidents at the show.

The attire, which exposed all her thighs and only partially covered her buttocks has sparked controversial discussions on decency.

While others have condemned the outfit, a section is defending her, claiming it achieved the goal of getting her the hype and attention craved for so much in the showbiz industry.

Find below photos of Eno 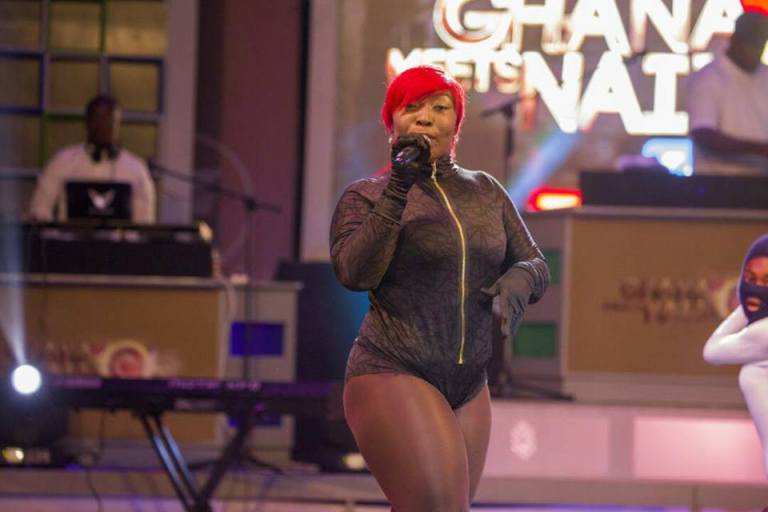 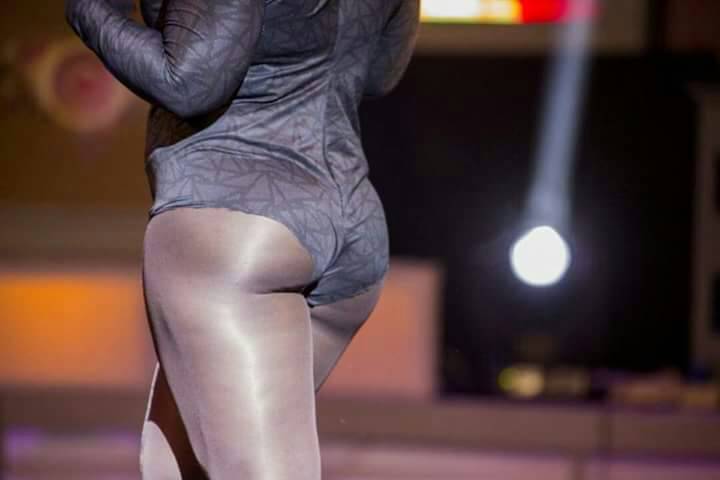 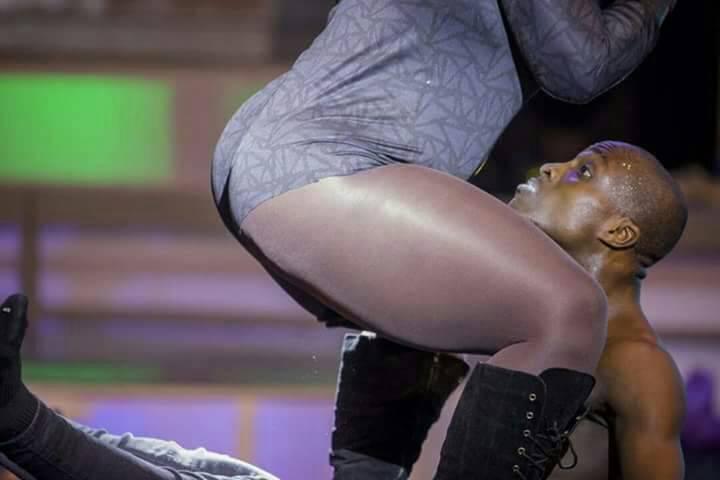 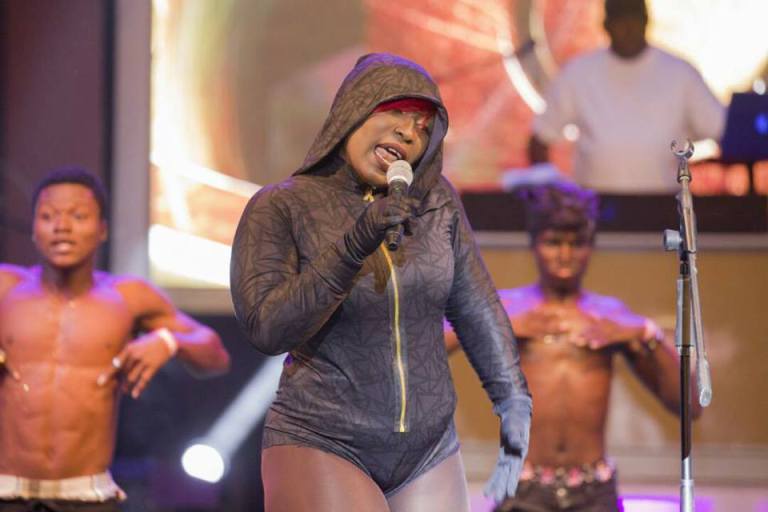 Patrons of this year's Ghana Meet Naija concert left the venue heavily intoxicated with excitement  as they were thrilled with music and amazing performances from all the artistes on the night.

Ghanaian dancehall musician Charles Nii Armah, known on stage as Shatta Wale has revealed that beefing with fellow industry players is part of him.

Even if my husband cheats, I will never file for divorce – Mercy Asiedu

Popular Kumawood actress, Mercy Asiedu is determined not to leave her new husband for any reason because he is hot and many ladies are craving for him.

Drake toppled Adele's record for the most prizes in a single night at the Billboard Music Awards on Sunday when he was presented with the best artist accolade.

Controversial Singer Mzbel does not want former President John Mahama to stage a comeback in the 2020 presidential election.

Almost all my ex-boyfriends were intimidated - Nana Aba opens up

TV presenter, Nana Aba Anamoah has revealed most men she dated tried to convince her to change career, because they were intimidated by her fame and media prominence.

Fashionista and broadcaster, Kwasi Kyei Darkwa popularly known as KKD has join in the ongoing debate on the just released BET nomination for the Best International Act (Africa Category).

A Harry Potter prequel handwritten on a postcard by JK Rowling has been stolen in a burglary in Birmingham.

The Chairman of the Ghana Music Rights Organization (GHAMRO) and a highlife artiste, Rex Omar has described Shatta Wale as a highlife king.

Happy FM’s presenter, DJ Advicer, has been adjudged the best Music Promoter for the year 2017 at the just ended Rush Ghana DJ Awards.

Nigerian musician, Banky W, known in private life as Bankole Wellington has announced his engagement to actress Adesua Etomi on social media, saying “I fell in love with an actress. Now my life is a movie.”

Lilwin releases two videos, 'Does I care' and 'Meyare' on May Day

Josh Laryea did not sleep with me - Mzbel

I place music before my £26,000 a year nursing profession – Diana Hamilton

Award-winning gospel artiste and nurse, Diana Hamilton, says she has always placed her music career ahead of her £26,000 a year nursing profession.

Nigerian actor, Zack Orji has expressed his love for cars as he stormed the Trade Fair Center in Accra to watch vehicles on display at the Quality Insurance Company(QIC)'s Auto Show.

The two-day event saw several vehicles including Honda, Hyundai, Nissan, Audi,Scoda as well as Benz on display while patrons were also given the opportunity to test-drive. 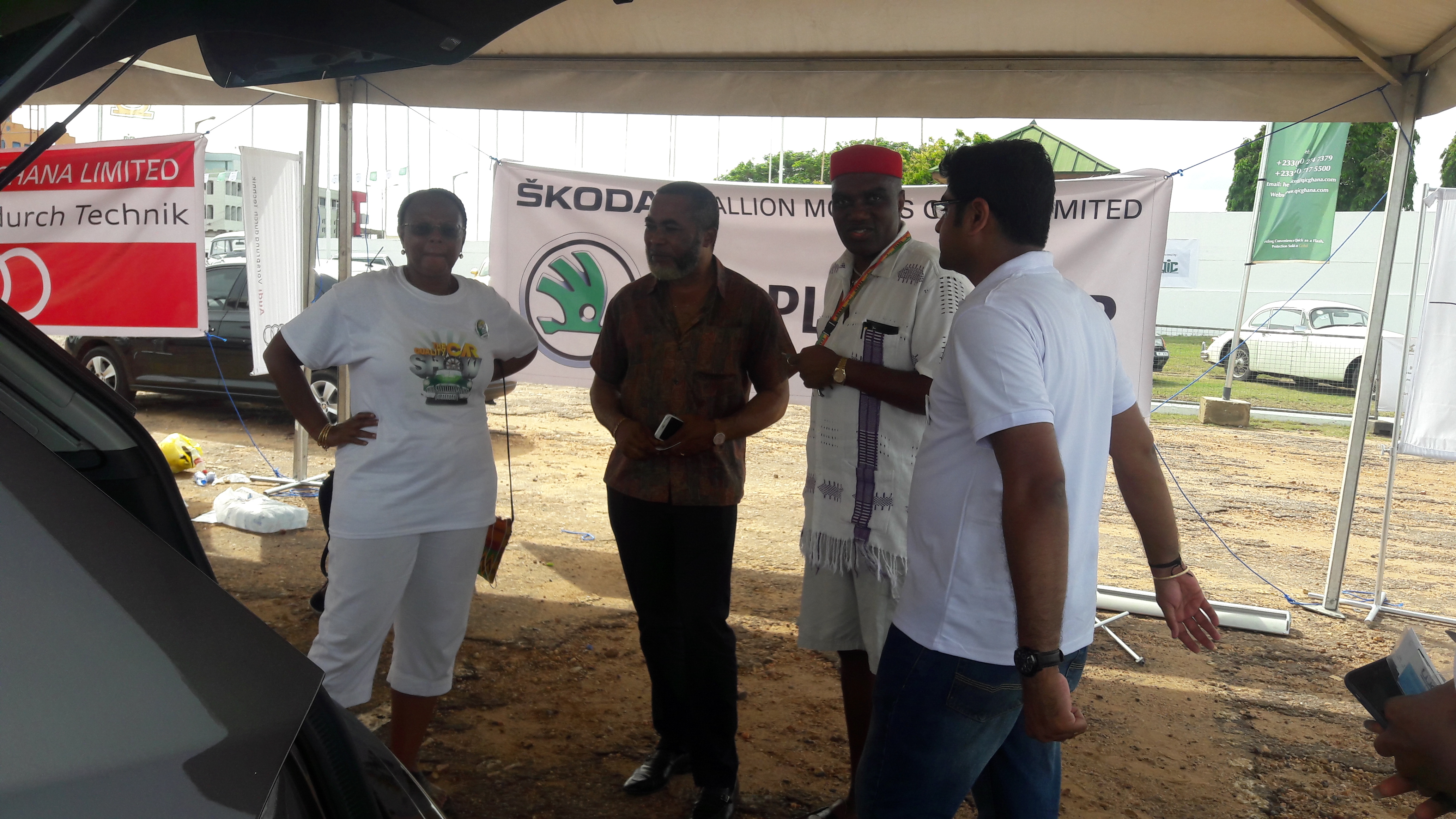 Zack who was in the country for a visit also took the opportunity to visit the Trade Fair to interact with dealers for future transactions.

The astute actor also interacted with patrons of the show as well as some dealers of oils and lubricants. 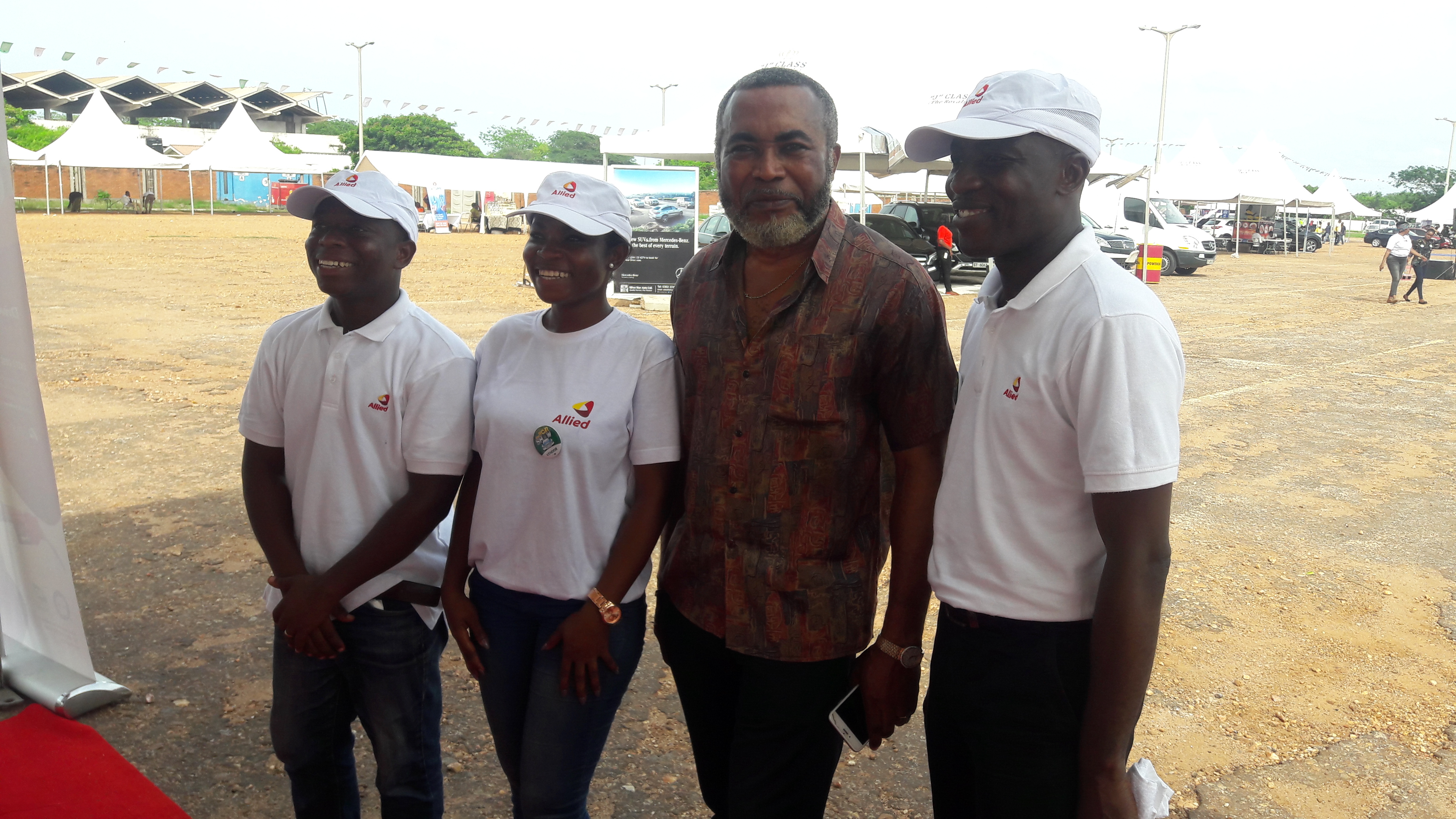 The Auto Show by QIC was aimed at given the platform to people to have a feel of vehicles and also an opportunity for dealers to interact with customers.

Adonko bitters at the annual Adonko Aseda Bash in Kumasi on Easter Monday [April 16] has rendered a lot of merrymakers struggling to find their feet to their various destinations after taking in the liquor.