2020 Top 45 stories that made the headlines in Sports 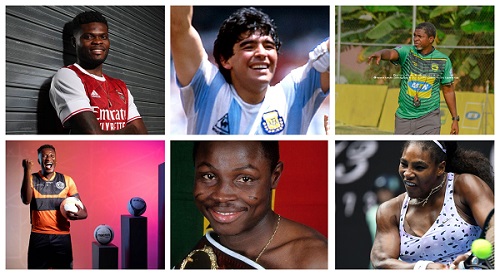 A lot can happen in one year. The sports world moves quickly, and it can be easy to lose track of the biggest stories as time goes on.

From Kwasi Appiah losing his job as the Black Stars coach in early January to Isaac Dogboe returning to winning ways, Asamoah Gyan making a return to the Ghana Premier League and the sad news of Diego Maradona's death.

Primes News covered all this story and below we take a look back at the Top 45 stories that made the headlines in Sports in 2020.

Coach Kwesi Appiah will no longer be in charge of the Black Stars as the Ghana Football Association (GFA) has dissolved the technical teams of all national teams.

This means that from coaches to the last man on the technical team has lost their jobs.

The Ghana Football Association has appointed Charles Kwabla Akonnor as Head Coach of the Senior National team, the Black Stars.

The former Black Stars captain will be assisted by David Duncan as Assistant Coach.

The Chinese company beat off competition from other media giants to acquire the right to broadcast the Ghana Premier League after losing it last year.

4. Sadio Mane wins 2019 CAF Player of the Year Award
Senegalese forward Sadio Mane has been fourth time lucky after been named winner of the 2019 CAF Player of the Year.
5. Kotoko fan hit by stray bullet at the Baba Yara Stadium in critical condition
A Kumasi Asante Kotoko fan was hit by a stray bullet after their defeat to Berekum Chelsea at the Baba Yara Stadium.

There were reports he had passed on but Management member of Asante Kotoko Nana Kwame Dankwah has confirmed that he is not dead but rather in a critical condition at the Komfo Anokye Teaching Hospital.

Roger Federer is reportedly 'set to become tennis' first billionaire' in 2020 and only the fourth sportsperson ever to accumulate that level of wealth.

Federer's growing fortune means he will join Tiger Woods, Michael Jordan and Floyd Mayweather as the richest athletes of all time.

Executive Council member of Ghana Football Asociation, GFA Randy Abbey has made an astonishing revelation with regards to the association's elections which was held in 2019.

The Black Stars of Ghana have been drawn in Group G for the 2022 World Cup qualifiers.

Ghana have been pitted alongside South Africa, Zimbabwe and Ethiopia after a ceremony held at the Nile Ritz-Carlton in Cairo, Egypt.

US basketball legend Kobe Bryant and his daughter Gianna are among nine people killed in a helicopter crash in the city of Calabasas, California.

Bryant, 41, and Gianna, 13, were travelling in a private helicopter when it came down and burst into flames.

Manchester United have signed former Watford striker Odion Ighalo from Shanghai Shenhua on loan until the end of the season.

12. Rory McIlroy returns to world number one for the first time in five years

Northern Ireland's Rory McIlroy has returned to the world number one spot for the first time in five years.

Manchester City have been banned from the Champions League for the next two seasons and fined €30 million by UEFA.

Second half brace from Achraf Bencharki propelled the Royal Club to defeat Espérance 3-1 as they are now four-time Super Cup winners.

Tyson Fury has beaten Deontay Wilder to become the new WBC heavyweight champion of the world.

Fury produced a stunning performance in Las Vegas, dropping the Wilder twice before the American's team threw in the towel in the seventh round.

All Champions League and Europa League matches have been suspended "until further notice" by Uefa because of the global coronavirus pandemic.

17. All football competitions in Ghana suspended over Covid-19

The Ghana Football Association following the directives given by the President of the Republic on Sunday, March 15, 2020, has suspended all its competitions with immediate effect until further notice.

18. All sport in Italy suspended because of Coronavirus outbreak

All sport in Italy has been suspended until at least 3 April because of coronavirus, the country's prime minister Giuseppe Conte has announced.

Otumfuo Osei Tutu II has directed that Asante Kotoko should not sign any new player for the first team for a period of one year.

The former boxer affectionately called 'Cobra' passed away on Tuesday, June 30, 2020 in Bronx, New York after battling with illness.

The Ghana Football Association (GFA) have released a statement following the fatal accident that occurred on Saturday involving Juvenile footballers.

The accident occurred on the Kumasi-Offinso road in Ghana's Ashanti region where it claimed seven lives of the  Ghanaian youth players after a bus they were travelling in crashed into a river.

The children, between the ages of 12 and 15 were returning from player registration when the accident occurred.

The seven Juvenile footballers who lost their lives in the Offinso accident weeks ago have been buried.

The seven boys, namely, Ofori Amanfo Ramsey, Alex Agyemang, Antwi Richmond, Abdulai Jamal, Hubert Anaba, Boakye Samuel and Kwame Opoku were on their way from a juvenile screening exercise at a registration centre at Afrancho, near Kumasi in the Ashanti Region when the unfortunate incident occurred.

Palmer wanted the GFA elections annulled and his candidacy reinstated for fresh elections to be held.

However, in a letter addressed to both parties, and signed by the President of the Panel, Michele Bernasconi, CAS backed the decision of the GFA to disqualify Palmer from contesting the election.

Former WBO Super Bantamweight champion Isaac Dogboe bounced back in grand style as he stopped Mexican-American boxer in Round 8.

The Ghanaian who has not fought since his last defeat to Emanuel Navarette in 2019 was too sharp for his Mexican-American opponent at the MGM Grand in Las Vegas, USA.

There will be no Ballon d’Or winner in 2020, with France Football announcing that due to the “lack of sufficient fair conditions” a prize that has been dominated by Lionel Messi and Cristiano Ronaldo in recent times will not be awarded for this calendar year.

The cancellation comes after a meeting where the Ghana Football Association's Executive Council met to deliberate on the football calendar after months of no footballing activities due to the coronavirus pandemic.

The start date of the AFCON 2021 has been rescheduled in the wake of the coronavirus pandemic.

Bayern Munich overcame Paris St-Germain in a tightly contested Champions League final in Lisbon to claim the crown for the sixth time.

Europa League kings Sevilla won the tournament for a record sixth time thanks to victory over Inter Milan in a thrilling final in Cologne.

The Confederation of African Football, CAF have expressed shock over the missing AFCON trophy in Egypt.

Nana Yaw Amponsah has been unveiled as the new Chief Executive Officer of Kumasi Asante Kotoko.

Asante Kotoko have announced their management team to steer the affairs of the club for the next 3 years.

Ghana has given the approval for the payment of $45,000 loan owed boxing legend David Kotei, popularly known as D.K. Poison.

The midfielder becomes the most expensive Ghanaian player in history since Michael Essien's £24.4 move from Lyon to Chelsea in 2005.

President Akufo-Addo has sworn into office a nine-member Local Organising Committee (LOC) to commence preparations towards the 13th African Games to be staged in Ghana in 2023.

The Eagles of Mali flew over the Black Stars of Ghana in a friendly at the Emir Sports Complex in Turkey.

Mali have always proved a difficult customer for Ghana in all competitions at different levels of football. On two occasions, they beat the Black Stars to clinch Bronze at the Africa Cup of Nations in 2012 and 2013 in Gabon and Equatorial Guinea and South Africa respectively.

41. Video: Ghana's Richard Lartey given oxygen in ring after being knocked out in Round 2

The Dillian Whyte-managed monster was in a big step-up fight, but less than two rounds to destroy his opponent with a walk-off, one-punch knockout.

Confederation of African Football (CAF) president Ahmad has been banned for five years by FIFA for breaching various codes of ethics.

44. Covid-19: Akufo-Addo releases ₵900k to Ghana Premier League clubs
The President of the Ghana Nana Addo Dankwa Akufo-Addo has authorized the Ministry of Youth and Sports to release an amount of nine hundred thousand ghana cedis (GH₵900,000.00) as first tranche of payment to support the 18 Premier League clubs to offset some of their expenses in this era of Covid-19 pandemic.
45. Kotoko sack coach Maxwell Konadu
Kumasi Asante Kotoko have sacked their head coach Maxwell Konadu.